The Bayshore Cinema was located in the old Bayshore Gardens shopping center on 14th Street W./Business US 41. It opened on October 19, 1960. It was originally a large single screen theater that was twinned on November 16, 1973 . During its last days it had become a discount theater. My fondest memory of the old Bayshore Cinema was seeing "Star Wars" there in 1977 for the first time when I was seven. it was closed on May 14, 1991. It was completely torn down with the entire plaza and an entirely new shopping center was built there.

There is a Bayshore Cinema that was owned by General Cinema. It was in Sarasota. Cinema Tour has is listed as Hwy 41 in Sarasota which leads me to believe this is the same one.

It is not listed on cinema treasures under General Cinema. It might still be listed because I have noticed that some theatres have the chain as unknown even though it lists the chain in the post and some times only had one chain that ever owned it.

If it is it opened in 1960 and close in 1991 and it was a twin. I don’t know if it opened as a single or not. Cinema tour also has an AKA as North Train Cinema.

This theater was located on the North Tamiami Trail/US 41 going south toward Sarasota, so it’s possible that it might be listed as Sarasota. And the 1960 opening date sounds right because it was an older theater, even in the 1970s. Someone once told me they saw “Earthquake” there while it was still one large single screen, before it was split into two auditoriums. The first thing I remember seeing there was “The Rescuers” in 1977 (which I saw there again when it was re-released in the 80s), but I can’t remember if it was still only one screen or if it had already been “twinned” by that time. The last thing I saw there was “Honey, I shrunk the Kids”, by which time it was operating as a discount theater. It was torn down shortly after that, so 1991 seems accurate as the year it closed. The location of the theater was just to the right of where the Target store on US 41 stands today, about where TJMaxx is. 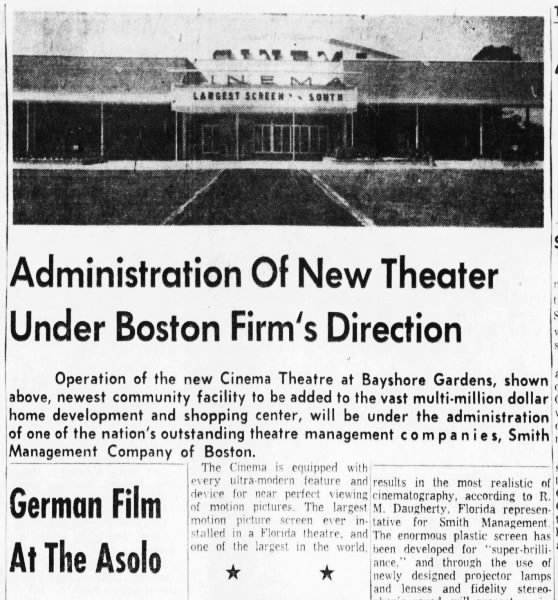 Smith Management - General Drive-In later General Cinema - drops the largest new hardtop screen in the south opening at Cinema Theatre in Bayshore Gardens October 19, 1960 at 6016 14th Street. The theatre would be renamed as Bayshore Gardens Cinema and Bayshore Cinema. The theatre closed for two months to become twins relaunching on November 16, 1973 with Cops & Robbers and American Graffiti and renamed as Bayshore Cinema I & II. At end of lease it was then dropped by GCC. At the end of lease. It briefly held on as an independently run discount house that closed on May 14, 1991 with King Ralph and Awakenings. It was then razed.