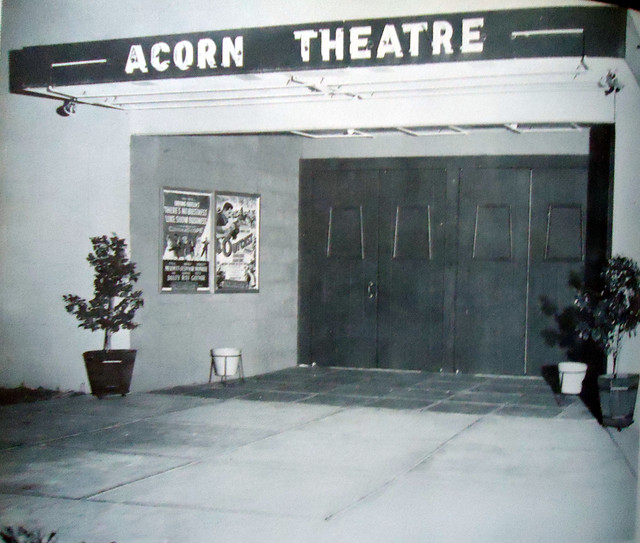 The Acorn Theatre opened March 10, 1955. A feature of the auditorium was the laminated wood arches in the auditorium, which was shaped similar to a Quonset Hut style theatre. All seating was on a single level, and it was the first theatre in California to have Continental style seating, with no centre aisle, the aisles were against the sides of the building.

The Acorn Theatre was independently operated.

Chuck; I really do not know. We need a local to comment

I wondered when this one would show up in the index. As listed in the city directory, the Acorn was supposedly located on Ventura Boulevard in Thousand Oaks but there is no Ventura Boulevard that I could find. It’s an entirely different theatre from the Melody. I’ll get the street address when I’m back in my office. I’ve been wondering where the building is for a long time now.

I believe there was a Ventura Boulevard in Thousand Oaks at one time. Before the freeways were built, Ventura Boulevard in Los Angeles County was U.S. Highway 101, and I think road had the same name as it passed through Ventura County. Most of the old road, which was originally part of El Camino Real, was gradually converted into the Ventura Freeway over the years. In a few places bypasses were built.

My memory of the area in the pre-freeway era is very dim, and the changes since have been drastic, but I suspect that the oldest part of Thousand Oaks was one of the areas bypassed, and that the business street that was once Highway 101/Ventura Boulevard is probably the street now called Thousand Oaks Boulevard. Unfortunately I have no old maps of the area to check.

The address I have for the Melody Theatre was 1792 N. Moorpark Road.

Current GoogleMaps puts the address where the entrance to a shopping complex is now. I think it’s safe to say that the Acorn has gone to the old oak grove in the sky.

According to Carol A. Bidwell’s 1989 book “The Conejo Valley: Old and New Frontiers”…

“The Fox Conejo was the first real movie theater in town, but local residents had had a place to watch movies since the late 1950s. Don Goshey showed movies in a left-over World War II quonset hut, moved to a lot on Thousand Oaks Boulevard at the northern end of Hampshire Road, in front of the short-lived Acorn Bowl. Moviegoers sat on folding chairs and watched whatever movies Goshey could find to rent. Refreshments were provided by the mothers of Conejo School youngsters who sold home-popped popsorn to raise money for school projects and activities.” (p. 75)

I was a Thousand Oaks resident from 1961 to 1994. I recall going to the Acorn Bowl as a teenager but don’t remember attending the Acorn Theater.

And yes, the Melody Theater was indeed on Moorpark Road, next to Thriftymart supermarket in the Park Oaks Shopping Center.

It is amazing anyone had a photo of the little theater to post on the Internet. What a wonderful memory.

The Acorn Theater belonged to our next door neighbor. It was on Ventura Blvd which was later renamed Thousand Oaks Blvd. Highway 101 was built several years before I was born. It did not transition to a freeway until the 1960s. The turn off at Moorpark Rd had a sign pointing up Ventura Blvd pointing to Thousand Oaks which was centered in the area where the Acorn Theater and Oakdale Market were located. I believe it is possible to find a picture of that sign at the corner of Moorpark Road and Ventura Blvd with the road sign beside it. Possibly something by Ed Lawrence.

Ventura Blvd had small food stands and other businesses that eventually failed because of the change created by the 101 Hwy and later freeway.

The address looks correct. Angelo’s Texaco station was located across the street and a maybe 150' west at 3050 Ventura Blvd.

Acorn Theater was the only place in town with air conditioning. The market had a swamp cooler that was not real effective in the moist coastal air.

Home air conditioning did not exist for most if any people. In the summer Mr Goshet (I believe it was spelled that way. Pronounced Go shay) had all day matinees in the and when the heat was so high that children could not stay inside houses we were sometimes invited to spend the entire afternoon watching various cartoons and cliff hanger to-be-continued shorts so that we could stay cool and be safe.

The newer official press people came to the area after the push was on to try for cityhood in Thousand Oaks. Many came after it became a city and none report history as it happened. They revise it to pump up the reality they want it to be.

Prior to that we were a mostly ignored tiny town in Eastern Ventura County with potholes in Ventura Blvd that you had to drive around because the county did not feel it was worthwhile to spend money on a dead road in a dead area so far away from the government center.

When the Janss family decided to build the mall down at Moorpark Road and redefine where Thousand Oaks was in the early 1960s they put in the Fox Conejo Theater and the wonderful little Acorn Theater suffered. Mr Goshet took on a partner who claimed that the bowling alley business was the next big thing. They converted the Acorn Theater to the Acorn Bowl and not long after that the Janss family decided to build a bowling alley on the other side of town near the Janss Mall and applied more negative pressure to the original center of town. All of that was around the time that the town eventually incorporated into the City of Thousand Oaks and the name of the road was changed to Thousand Oaks Blvd.

I do not recall the Acorn Theater being a quonset hut but it closed when I was maybe 7 or 8 years old and the bowling alley took its place. I do not recall any major exterior construction for the Acorn Bowl either. My recollection was they remodeled the interior and it is hard to imagine a bowling alley in a quonset hut but people were quite creative back in those days.

The Park Oaks center where the Melody Theater was located came after the Janss Mall. It was way up Moorpark Road at Janss Road. Quonset Hut

cobeal: If you look on the “Photos” page for this theater (click the link above the photo displayed on this page) you’ll find an interior photo and a scan of a newspaper article about the opening of the house. The newspaper spelled the owner’s name Goshay. As he was interviewed and photographed for the article that is probably the correct spelling.

The article notes that the Acorn Theatre had a Lamella roof, so it was definitely not a quonset hut, but the method created a similar barrel vaulted structure, as can be seen in the interior photo on our Photos page.

There is no date on the article, but the text says the Acorn was scheduled to open on March 10. As it was listed in the 1955-1956 Theatre Catalog, which would have been published prior to the end of 1955, and, according to the article, when the Acorn opened it was equipped for movies made in both CinemaScope and VistaVision processes, it must have opened 1955. CinemaScope first appeared in 1953, but VistaVision, developed by Fox rival Paramount Pictures, premiered at Radio City Music Hall on October 14, 1954. Thus the March 10 opening of the Acorn had to have been in 1955.

Hi, we are a regional magazine in the Conejo Valley interested in learning more about the history of this theater. Is there any information available on the original source of this photo?