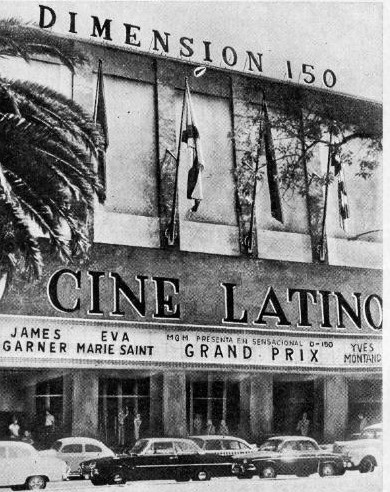 The Cine Latino was opened on 20th April 1960 with Yul Brynner in “Solomon and Sheba”. Located in the Zona Rosa district of central Mexico City, this modern cinema had seating provided in orchestra and balcony levels. In 1968 it was remodeled and equipped to present movies in Dimension-150 format, reopening with James Garner in “Grand Prix” showing on the 90ft x 34ft curved wide screen.

In the late-1970’s it was divided into three screens. Later closed, there were plans for restoration in the mid-1990’s to be part of the revitalization of Zona Rosa, but these came to nothing. The Cine Latino was demolished in November 2009.

I saw E.T. and it looked like 70mm so I asked the projectionist about it. He invited me into the projection room which was in the center of the main floor. He had shown Terremoto/Earthquake in Sensurround and the speakers were still in place along with the amplifiers. There was a page on the wall with cues about when to turn the Sensurround on and off. The projectionist was apparently not familiar with his new Dolby Stereo and he was turning it on for music only, similar to his experience with Sensurround. E.T. was 35mm. I also saw Yes, Giorgio. Roar/El Gran Rugido was advertised as having 4-Track Magnetic Stereo. Oddly, Roar’s Panavision image was quite small on the huge curved screen.

I should have mentioned previously that there were two Norelco 35mm/70mm projectors and the projectionist showed me how they were changed for 70mm. He had a 70mm setup or test reel on hand. It’s strange that I don’t remember any D-150 signage and I hadn’t recognized the curved screen as being D-150. Curved screens have always meant bad focus to me and that wasn’t the case here.

The Cine Latino was opened on 20th April 1960 with “Solomon and Sheba.”