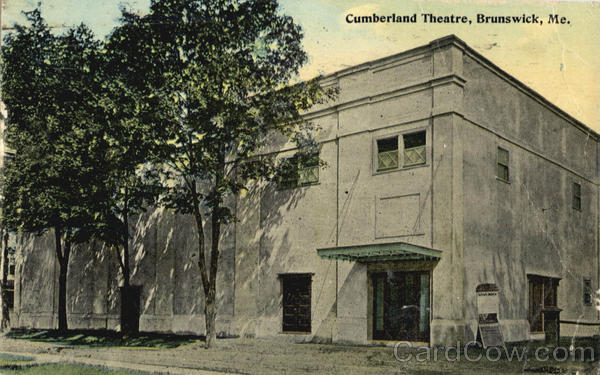 The Cumberland Theatre was owned by Maine and New Hampshire Theatre Company located in Boston.

The Cumberland Theatre was opened in 1910. By 1941 it was listed as being operated by Paramount Pictures Inc. through their subsidiary Mullins & Pinanski. It continued until at least 1950.

Street address was Cumberland Street but I don’t know the number. I checked the entire length of Cumberland St from Google aeriel views and saw nothing that resembled a theatre building so it must be demolished.

The Cumberland Theatre is mentioned frequently in various 1920 issues of Bowdoin College’s student newspaper, The Bowdoin Orient. Some of its ads were for live theater performances. The newspaper also carried ads for a movie house called the Pastime Theatre, but no addresses were given for either house.

I totally screwed up the first sentence of my previous comment with sloppy cut-and-paste editing. It should say this: Here is a web page with an index of articles from Brunswick newspapers that are available on microfilm from the local library.

The Theater was torn down. I want to say around 1972 or so. I remember going to it a lot when I was a kid. I grew up in Brunswick and remember the theater well. My Grandfather was in a Minstrel Band that used to practice in the boiler room of the theater in the early 20’s.

I found a photo of the Cumberland on an old postcard at cardcow.com http://www.cardcow.com/12066/cumberland-theatre-brunswick-maine/ (not promoting the site – just providing a link for reference).

CGGunner could probably verify, but my thinking is that the Cumberland must have been less than a block from Maine St. Most downtown theaters were on or very close to the main drag. Also, half a block up from Maine St. it gets residential.

By the way, the street view image on the overview page is off by a couple blocks – it shows a church on Pleasant St., not Cumberland St.

Growing up in Brunswick Maine I too attended the Cumberland Theatre as a youngster during the sixties. Waiting in line against the Maine National Bank fence was a common sight on any Saturday or Sunday afternoon. We would purchase candy at Day’s Variety, or F.W. Woolworths and sneak it in. Still to this day I am reminded of the Cumberland whenever I smell theatre popcorn. Saddened to see it demolished for a parking lot for Senters. I do have a two seat section from the theatre that my brother carried home during it’s demo that we still use today. I am trying to track down some photographs and hopefully can post later.

The Theatre Historical Society on-line archive has the MGM Theatre Report for the Cumberland; it’s Card # 351. Address is Cumberland St. There is an exterior photo dated May 1941. Condition is Fair. The report says it’s over 15 years old, shows MGM movies, and had 431 seats on the main floor and 223 balcony seats; total: 655. Competing is the Pastime Theatre. College student patronage. 1940 population 8,500.

The link to the index of newspaper articles I posted in an earlier comment is dead and unfindable, but the information in it might have been inaccurate anyway. The page for the Cumberland Theatre at The Cinema Data Project cites the July 20, 1912, issue of Motography as saying: “‘Cumberland’ is the name of a new motion picture theater opened at Brunswick.” It’s possible that the Motography item was mistaken about the house being new and it was merely reopening, perhaps under a new name.

The rather small entrance to the Cumberland can be seen in the background of this photo from the Maine Memory Network. I’m unable to be positive about the name of the movie on the first poster on the theater’s wall, even using the zoom feature, but I suspect that it might be the 1927 feature Broadway Nights.