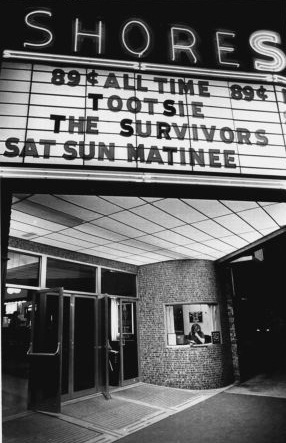 Built in 1946 and opening on November 14, 1946 with Bing Crosby in “Blue Skies”, the Shores Theatre was designed by architectural firm Steward & Skinner with associate architects Kemp, Bunch & Jackson. It operated as a 1,000-seat single screen movie house until the late-1980’s. At that time it was transformed into the Shores Performing Arts Theatre, one of Miami’s up-and-coming professional theatre companies.

On October 13, 2012, it reopened as an independent art cinema, screening the original opening Bing Crosby movie “Blue Skies”. It later was known as the O Cinema Miami Shores at the Miami Theater Center. It shares the same space as the Playground Theatre, which presents live children’s shows. In 2017 it became the Miami Theater Center staging family & children’s theatre, sometimes programming family films.

Recently took in a 35mm screening of 1970’s Miami/Fort Lauderdale lensed DARKER THAN AMBER and during a pivotal scene (don’t want to spoil it for anyone), you can see the Shores marquee advertising MIDNIGHT COWBOY.

This re-opens as a 350-seat single-screen indie house tonight. Opening fare is the same they opened with back in the 40’s — Blue Skies. If the photo in the article below is to be believed, the interior is Streamline Moderne. I don’t know if it’s original to the place, but at least it looks like it could be from that era.

Hello, Tony west. Here saved this theatre from 99cent slut showings to performing arts theatre in 1988. Sorry to see it is now a cheap last run movie house and the bing movie was NOT the first movie picture show that the I found the original movie and ran it in 1988 with the child star in parade that was the star. Know your facts my Adam assistant Linda Garcia Ramos will know also Ruth and also many others star stage production and we saved this 99 cent picture house anyone ever want to thank me I would welcome not heard a word from anyon in 27 years. Thanks. Hope u enjoy facts. Tony west.

Hello again, Tony west here if anyone would care to see my records and notes from way back I have them all tucked away safe I remember this one of my most wonderful executive director positions other than Miami design district prior everyone seems to forget of the team that set I to motion saving these Miami area landmarks. If anyone knows Linda Garcia famous. My former Adam assistant please tell her to contact we , she made history with me in the Miami area but seems not a soul wants to know about us and the facts. Thx. Tony. Miami: the Design District. One square Mile of Style.
Think Pink Miami design District. Did it all ……thx

Not sure what you are trying to say, Tony West. You may want to re-write that comment with some grammar. This theatre is now a speciality film first-run house.

On June 5th, 2016 I visited O Cinema Miami Shores at the Miami Theater Center to attend a live presentation of “The Flick” — a play about a cinema’s employees performed in the theater’s aisles, seats, and projection booth, while the audience sits in a seating area set up on risers on the stage where the screen of the cinema portrayed in the story would be!

A few days before, as the Universe would have it, I felt I had completed my project of saying almost everything I’ve been wanting to say about movie theaters on Cinema Treasures — so when this play popped up about a movie theater performed within a movie theater, I just had to go to “celebrate”!

As I entered the usher explained that I’d be sitting on the stage, and that I could still reach the restroom during the performance by using the aisle along the wall, though the restrooms are part of the set. (No one tried during the show I saw.) With anticipation I took the program she handed me and said “Well, then I’m ‘ready for my close-up’”. “Okay, Mr. DeMille” she responded with a smile. : )

I enjoyed finding out what it feels like to be a movie screen when, as part of the play’s story, a probably simulated projector would cast its light upon the audience on the stage.

Another favorite part was a cinema patron who gazes up at “the screen”/above us and fantasizes about the movies for a moment after the one he came to see was over.

I also appreciated one character’s concern with traditional vs. digital projection.

This run of “The Flick” ended on June 12th. The running time was three hours (including an intermission), which felt somewhat long to me when the story would thematically linger upon the rut the characters’ lives are sort of stuck in, but if you love movie theaters you should consider going if it comes to a theater near you.

A Miami New Times article about this production:

Harvey: The open area in the back of the auditorium you mention in your March 27th, 2008 comment as “standing room” is still there between the last row of seats and the restrooms at the back wall. Something about the restrooms feels historic to me though they also look renovated. The “Men” and “Women” (Ladies?) signs above the doors look possibly original. I’ve never seen turnstiles when I’ve visited this theater and wonder if they are in a closet somewhere.

The box office shown in the older photo is no longer used and tickets are sold at a counter just inside the door on the right or sometimes at the concession stand farther in at the end of the lobby also on the right. (Too bad, I like being able to walk up to an old box office, but perhaps having it inside feels more secure?)

I enjoy visiting what to me still feels for the most part like a small town movie theater.

The storefront to the right of the cinema is also used for theatrical performances as part of the Miami Theater Center who calls it Sandbox, a black-box theater.

I found it interesting when I read somewhere that, before the movie theater could reopen fully as O Cinema, the Miami Shores Village Council had to repeal an ordinance against exhibiting films in the village left over from a time decades ago when it was felt the theater was attracting a “questionable” crowd.

Al Alvarez: Wow, you were the manager here in the late 1970’s during those “controversial” days?! … Regarding your comment from January 14th, 2006, I didn’t experience Miami Shores in the 70‘s, but now when I visit for O Cinema, there are, for example, a more or less equal number of African-American/Caribbean, Caucasian, and Hispanic customers in the Starbucks down the street, who I assume are local to the Miami Shores/El Portal area. I’ve never heard of the possibly racist “island community” concept you mention you had dealt with, so maybe the town has moved on.

This theater is no longer an O Cinema location but is still the Miami Theater Center, focusing on theatrical performances for children and their families, and sometimes screening programs of family orientated films, meaning it is still technically an open movie theater.

I asked an employee at the original O Cinema in Wynwood who confirmed this, saying the change occurred about a year ago.

I Habsburg worked here and they have done a tremendous job restoring it. I have pics of the remenents of a theater after the hurricane of 1926. Does anybody know about that?

remkoolhaas, are the remnants you are referring to that of the Biscayne Park Theater in North Miami? Click here for the CT page I created for it. Where can I see your photos?