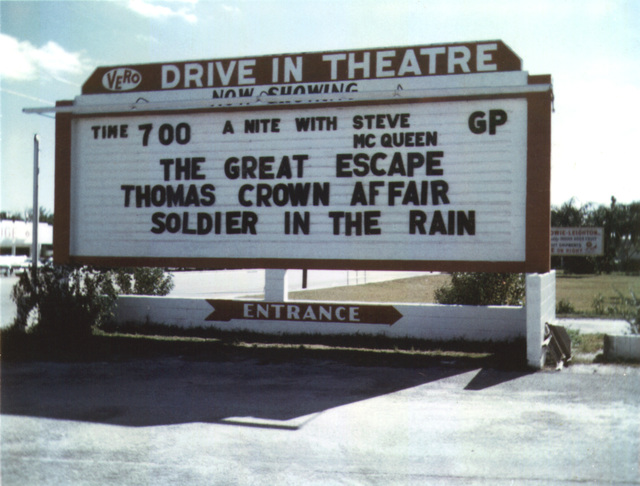 The Vero Drive-In opened on April 12, 1950, featuring the 1949 comedy-musical “Neptune’s Daughter” with Esther Williams, Red Skelton & Ricardo Montalban. The Vero Drive-In was opened by D.B. Garner & B.F. Hyde, Jr. (dba Talgar Theatre Co.) along with Rupert N. Koblegard Jr. (dba VeeBee Theatres Inc.). Koblegard had formed a partnership with Talgar Theatre Co. on the ownership and operation of his airers. The Koblegard family was well known as owners and operators of theatres in Florida. The new drive-in had a capacity of 350 cars with in-a-car speakers. In addition it featured paved parking ramps and driveways. The screen tower was one of the first to be built in triangular design to withstand hurricane winds and was 40ft wide. Jack Chestnutt, Sr. would be manager through-out the entire tenure of the drive-in theatre.

In February 1956, the screen tower was widened to 76ft x 38ft and supports were added to the back of the tower for screening CinemaScope pictures. In 1955, Koblegard sold his theatre holdings in Fort Pierce,, Stuart, Vero Beach, Cocoa & Melbourne, Florida. to the First Southeast Corporation. After the sale the theatres continued to be operated by Talgar Theatre Co. Later in 1960, the First Southeast Corporation sold their theatre holdings which included the Vero Drive-In along with the Fort Pierce Drive-In, Stuart Drive-In, Angle Road Drive-In, Cocoa Drive-In & Melbourne Drive-In to Frederick H. Kent & T.L. Hyde (dba Kent Theatres Inc.) of Jacksonville, FL. VeeBee Theatres was also disolved in 1960 at this time. The Vero Drive-In finally closed in 1980. The drive-in was demolished and it is now Majestic Plaza Shopping Center with the Cinemaworld Majestic Theatre 11.

It parked 300 cars and was owned by Talgar Theatres.Joins Number One Drive-in in Augusta and Waycross Drive-in as being located on that long highway from Maine to Flordia Bet there are many more on US 1. Thanks ANDY.

According to today’s Treasure Coast Newspapers, in a story headlined This week in history: March 31:

69 Years Ago: 1950 “The new Vero Drive-In theater under the management of Jack Chesnut will open rain or shine. … The opening attraction will be MGM’s ‘Neptune’s Daughter,’ in Technicolor, featuring Esther Williams.”