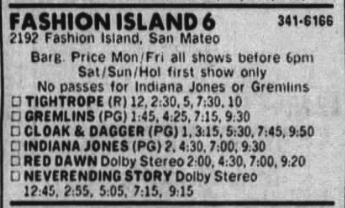 Do not confuse this theater with the Foster City Cinema on Shell Boulevard. This six screen theater was part of the new Fashion Island Shopping Center built in the early-1980’s. The theatre was opened December 11, 1981.

The shopping center was a flop from the beginning and was torn down (along with the theater) in 1995. Mann Theatres supposedly operated the theater for a few years before selling the lease to General Cinema Corp.

Now that I think about it, we bought some things at Montgomery Ward and had them sent to our Reno address BEFORE moving here in March if 95. So the mall was still in operation in 95. It must have been 96 0r 97 when it came down. I totally forgot about that. You say Red Robin is still operating? We were regulars at that place when it was at the original Fashion Island. There’s so much more retail going on there, than I realized.

Many thanks for the pictures of downtown Redwood City, the one shows the FOX THEATRE in the background. That was the theatre I worked at (along with other family members before me) that started my 12 year career with National General Theatres. I have so many wonderful memories of my “theatre days” with that company. Too bad Ted Mann had to come into the picture.

I understand there was problems with Syufy and Cinemark Theatres in regard to the continued operation of the original Century Theatre, after the new one opened on Broadway. Syufy must have sole ownership of the original Century, and does not want to let it go. It would seem counterproductive that there would be 2 Century Theatres in operation in the same town, and really not that far apart. Sorry to hear the tore down the UA on Veterans Blvd. That sure didn’t last very long. I think it had already closed in 95 be fore we came here.

Funny you mention Ward’s, they are still in business, but they only ship their products like Amazon does.

Toysrus opened December of 1997 (just in time for Christmas)

The company that purchased the land that was Fashion Island Mall won the bid at 40 million. I believe it cost around 300 million to get everything up and going. They were paying $15,000 a day in interest, so that is the reason they did a quick demolish and rebuild of the land. Torn down in late 1996 and new retail stores open in a year is pretty amazing. The condos were not ready at that point. I remember seeing truck after truck hauling away what was left of the mall down 3rd ave. It is amazing who much more productive the private sector is compared to the government. :)

Also, it is really cool to see the new Century theater next to the Fox theater in that pic.

I do remember seeing the Laster Star Fighter and D.A.R.Y.L. during the summer of 1984 at the UA in Redwood City.

Ben,great shots, I remember when i decided to drive over to REGENCY MALL and take a few pictures of my old triple REGENCY I,II,&III Cinemas: I knew the mall was slowly going down hill and i wanted a shot of the frontBoxoffice,It was inside the mall. So i took my pictures and walked out of a dying mall.Before I got to my car MALL SECURITY drove up and demanded to know what i was doing in the mall with a camera.I should have told them to piss off, but i explained what i did.I couldn’t believe it. A dying mall who would care.Hope you didn’t run into the MALL POLICE.Hell, they were never any help when i was the Assistant Manager in the early 80’s. I handled trouble myself.Bunch of wanta be “dirty harrys”,Small caps in honor of Clint Eastwood.

I worked for John Tarantino and Barbara at the Mann 6 from 82-84 prior to entering the US Army. They ran a tight ship but were very good people. If anyone knows how to get hold of either of them, please pass on the info! I’m in some of Mr. Tarantino’s pics, but dare not identify ;)
Steve Harker

Steve , you can e-mail me would like to hear from you John.

Never seen a movie there.I used to go into the video arcade in the mall called “The Gold Mine” which was close to the theater entrance..I even worked at the Round Table Pizza parlor in the mall.

yes,the Theatre was on the same side as Gold Mine you came in the entrance and it was the first space on the left!