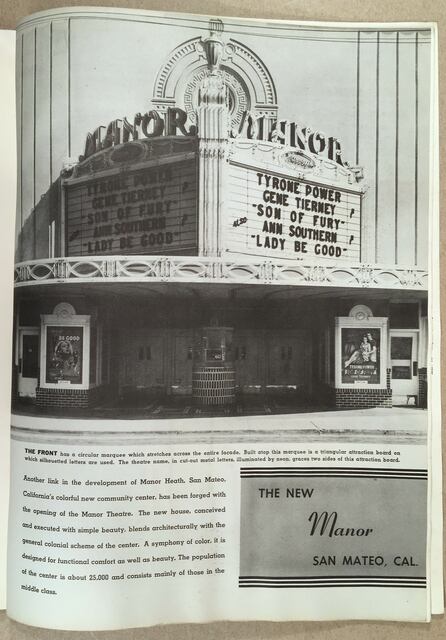 The Manor Theatre was opened in November 1941, as a single screen theater housing approximately 800 seats.

The lobby was round with the snack bar in the middle. It may have been built by Roy Coopers' West-Side Valley Theatres as they were the operators of the theater in the 1970’s.

It is believed that Lee Fuchsman was the manager for a short period during this time. The cinema was twinned in the mid-1970’s and remainded popular until it suddenly closed in 1982 folowing the death of Roy Cooper.

The Manor Theatre is located at 32 25th Ave.

This theatre has been an office building for quite a while. The upper half of the facade, with a Moderne interpretation of a Greco-Roman arch with a circular window in its center, still survives as originally designed.

In this theatre’s later years of operation, when so many theatres were losing their neon marquees in favor of plastic ones in the name of maintenance, this theatre preserved its neon-bedecked marquee because the manager at the time took care of it himself.

A friend of mine once worked for the demolition company who gutted the Manor when it was undergoing conversion to offices. He remembers operating heavy equipment in tearing up the auditorium floor. He remembers murals on the walls in what he recalls as an undersea motif. Ironically, this friend later grew to love old theatres and is now a fellow old theatre fan.

I remember seeing The Empire Strikes Back at “The Manor” in San Mateo back in 1980. Great Memories!

On 2/21/77, the theater was showing “Rocky” and “Freaky Friday”, according to the San Mateo Times.

The opening of the Manor Theatre is mentioned in the November 15 and November 22, 1941, issues of Boxoffice Magazine. The exact date is not given, but appears to have been shortly before the 15th. The house was built for Harvey Amusements. 10,000 booklets about the theater were distributed door-to-door in San Mateo to publicize the opening. I wonder if any of them are still around?

By the late 1940s, the Manor was being operated by Blumenfeld Theatres. It was bought by Roy Cooper Theatres in 1961, according to an item published in Boxoffice of August 14 that year.

According to the October 25, 1971, issue of Boxoffice, Cooper’s West Valley Theatres had adopted an all seats 50-cents policy for the Manor, following the lead of the El Camino in San Bruno and several other Bay Area houses operated by Dan Tocchini’s Associated Theatres.

I’ve been unable to find any later mentions of the Manor.

The Manor Theatre opened on Nov. 14th, 1941 and it was operated by Harvey Amusement Co.

The opening brochure is probably in the possession of the daughter of Harvey Amusements owner. Kay Wells of Cloverdale California. She probably has photos, too.