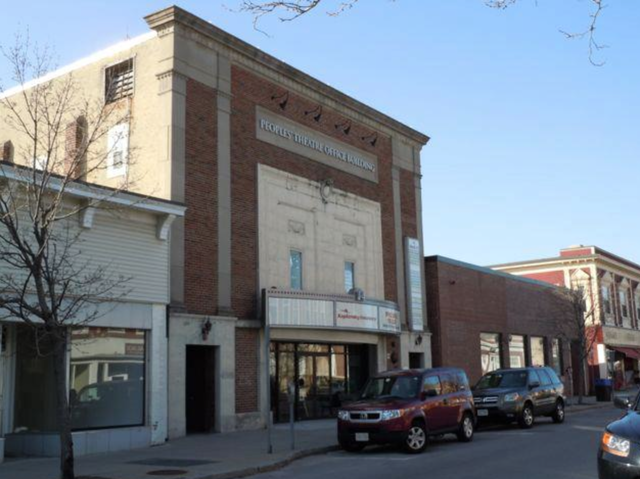 Any more information on it would be appreciated.

An advertisement for both the Peoples and Fine Arts theatres is on page 92 of this book:

The name of the theatre doesn’t have an apostrophe in this ad.

The movies advertised for the “Week of December 31” are Dallas with Gary Cooper, Crisis with Cary Grant, and Devil’s Doorway with Robert Taylor. All of these movies came out in 1950 so I assume that’s when the ad ran. Admission was 44 cents, or 16 cents for children before 6:30. There are ‘Daily Broadcasts from WKOX Framingham’ but this is not otherwise explained in the ad.

The STAR Tech Healing and Learning Center appears to be one of the principal tenants of the Peoples' Theatre Office Building. A good photo of the building, complete with intact (or re-created) marquee, is on STAR Tech’s web page.

Since the sign on top has an apostrophe after PEOPLES' , that’s the name I used here when submitting this theatre.

Here is a photo of the People’s Theatre, from a history of Maynard published in 1921.

Can you also link to the whole book and tell us what page this was on? Thanks.

The book is A Brief History of the Town of Maynard, Massachusetts by William H. Gutteridge. The photo is on page 75, and the theater is also mentioned briefly on page 64.

What is the ‘Rivest Site’ ?