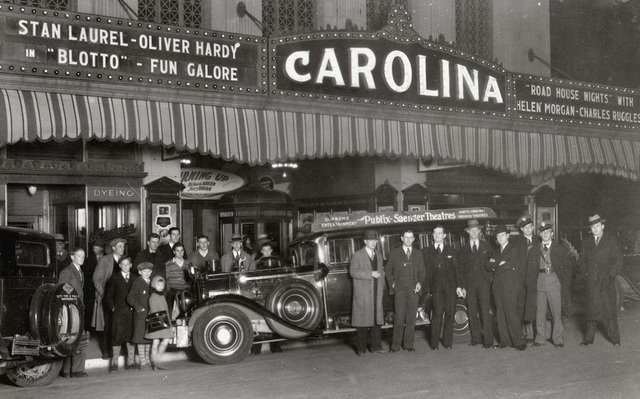 The Carolina Theatre in Greensboro was built for Saenger-Publix and opened on October 31, 1927. At the time it was the largest theater in the state with seating for 2,200. It was also one of their most expensive to build, costing over half a million dollars. Saenger advertised the new movie palace as “The Showplace of the Carolinas”.

It was designed by architect James M. Workman in a Greek Revival style for the exterior, and inside an Italian Renaissance style. The striking facade resembled an ancient Greek temple, complete with Ionic columns supporting a pediment. The terra-cotta decorating the facade was polychrome, in brilliant colors.

The walls of the lobbies, foyers and halls were faced in sandstone, while the floors with inlaid multi-colored marble tiles. In the main lobby, the ceiling was painted to resemble a twilight sky, in shades of blue and pink. The mezzanine and lounge areas featured travertine marble on their walls, as well as rows of dark green marble Corinthian columns, capped with gilded capitols. The lounges featured a women’s powder room and men’s smoking room, all as luxurious as in any major city’s movie palace of the era, with attendants, plush chairs and sofas and golden fixtures.

The auditorium, decorated in Italian Renaissance and neoclassical flourishes, could seat over 1,300 on the orchestra floor, and another 900 in the balconies. On the side walls, rows of Corinthian columns and Roman statuary stretched from the balconies in the rear to the towering proscenium arch, dramatically lit, and sparkling with gilding. The auditorium ceiling featured an oval shaped dome, from which hung a massive European crystal chandelier.

The ornately decorated proscenium arch featured a mural by Herman Herschauer of rows of dancing maidens. Rising 90 feet high, and 35 deep, the Carolina’s stage was one of the largest in the South when it opened, able to accommodate the most elaborate of stage revues or vaudeville acts (which were both a staple in its early years, along with the occasional opera or circus, in addition to movies.)

After falling into disrepair and decline after Saenger gave up the Carolina, the theater was fortunately spectacularly restored to nearly its original condition by its current owners, the United Arts Council of Greensboro, giving present-day movie palace fans a chance to experience what it was like to see a motion picture on a huge silver screen, and live acts on its stage, amidst the opulent 20s decor.

The Carolina was added to the National Register of Historic Places in 1982, along with a large portion of downtown Greensboro.

Brian: Thank you so much for your reply to me via CT. Now everyone knows about your organ. We, at Cinema Treasures are so very pleased to know that you have your theatre pipe organ as so many theatre have lost their pipe organs for various reasons. And a special thank you to the Piedmont Theatre Organ Society for maintaining a musical treasure.

A former longtime CT member posted here in 2005 about the Robert-Morton organ and it raised my curiosity…until now. I hope to visit the Carolina Theatre and see a performance with organ music. A recent visit to Greensboro this past Sunday allowed me to take some exterior photos prior to the US Figure Skating Championships finale.

Here is an ATOS link to the organ page…you can follow the links to hear the organ and see the plans and interior pics of the Carolina.

This opened on October 31st, 1927. I posted the grand opening ad in the photo section for this theatre.

Chuck: Thanks. I was at the Carolina years back, but wasn’t able to see that interior.

There is one theater which was running at least 30 years in Greensboro which isn’t listed. This was on Tate Street and was at one time called the Victory. In the fifties – sixties it was called the Cinema and showed art house movies catering to students from Woman’s College, later UNC Greensboro and their dates. The owner manager for a while was Eugene Street.

The Victory Theatre is listed on this site.

The Victory Theatre on Tate Street was also known as the CINEMA. More information on theatre is listed on the Cinema Treasures site.