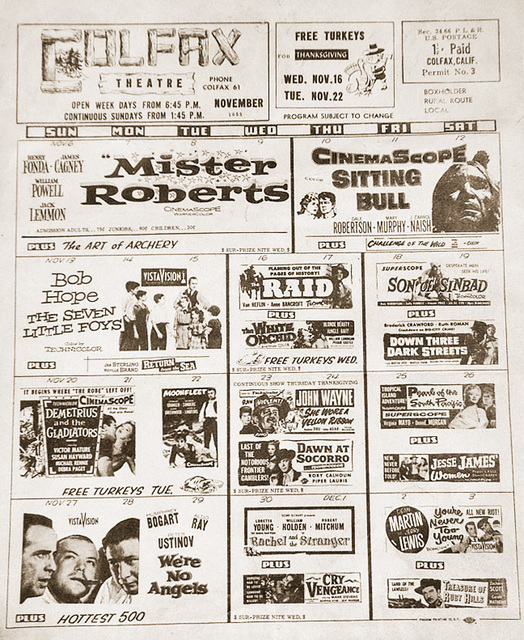 Colfax is an old gold mining town from the 1849 gold rush in Northern California. The Colfax Theatre was opened in 1939 with 394 seats, and was a replacement for an earlier Colfax Theatre, located on Depot Street, which burnt down. It was renovated in 1988-1989 to the plans of Sacramento architect Jay Hyde.

When you first enter the theatre you will see a display of the historic old movie equipment. The Colfax Theatre played current running films for $6.50; there are never any large crowds.

It was the best place to be for the opening night of a big movie. Best buy around too, and well worth the 15-20 minute drive coming from Auburn or Grass Valley (many drive up from Sacramento (45miles). The Colfax Theatre was closed in around November 2008. It was reopened December 2014 as a live music venue, with occasional movies. It was closed January 1, 2018. It reopened in October 2020.

Not sure if this is the same theater. Photo is dated 1982:
http://tinyurl.com/clarsb

This blog entry, at View link adds some interesting information to the history of the theatre and its practices.

The Colfax Theatre is no longer operating as a movie theater. This article in the Roseville Press Tribune, dated November 20, 2008, says that the Colfax had been closed, but would soon reopen as a venue for community events. I’ve been unable to find any events at the Colfax listed anywhere on the Internet.

The theater’s its My Space page is still up, with a few nice photos of the auditorium in its slide show, but the blog section hasn’t been updated since June 23, 2008. The main page apparently hasn’t been updated either, as it still gives admission prices.

The opening paragraph of the current Cinema Treasures description of the theater contains an error (and as the house is no longer an operating movie theater, pretty much the whole description is obsolete.) The Colfax Theatre opened in 1939, acording to both the My Space page and a 1990 article in Boxoffice (the 2008 Roseville newspaper article I linked to says 1940.) The earlier Colfax Theatre it replaced had been located on Depot Street, and had been destroyed by fire. Local businessman Oswald Marson built the entirely new Colfax Theatre on a lot he owned on Main Street. As far as I can discover, the Colfax Theatre has never had any other name. Since the 1980s renovation, it has had 250 seats.

The October, 1990, Boxoffice article tells about the renovation of the house by Wendell Jacob, and has a couple of small photos. Boxoffice says the style is Art Deco, but the numerous photos available show a much simpler style, so I’d say it would be better described as Streamline Modern. Most of the fixtures in the theater are vintage pieces that have been restored.

I’ve been unable to discover the original architect of the Colfax, but Boxoffice says that the 1988-89 renovation, which involved almost completely stripping the interior of the building, was designed by Sacramento architect Jay Hyde. Hyde’s LinkedIn profile reveals that from 1982 until 1994 he was Director of Design at SH2A Architects (now Rhetta Associates,) the Sacramento firm that also renovated the Crest Theatre in that city (1997) and the Varsity Theatre in Davis (1993.)

The Colfax Theatre is apparently still owned by Wendell Jacob’s granddaughter, Emma Mae Jacob, who has dropped her middle name and, having relocated to Nashville, has embarked on a career as a country music singer.

Here is a paraphrased summary of news about the Colfax Theatre as reported in several articles from the Colfax Record dated between January 2013 through January 2014.

“The Colfax Theatre stopped showing movies in August 2008 and with rare exceptions was dark until the end of December 2012. It was still owned during this time by Wendell Jacob who had purchased, renovated and operated the theatre starting in 1986. Jacob later gifted the Colfax to his granddaughter, Emma Mae Jacob, on her 13th birthday. with a provision that she could take over the business when she turned 18. Declining business caused the cessation of mainstream film showings in 2008.

On December 31, 2012 Jacob sold the theatre to Gary Tomsic, a former TV cameraman and film producer with 40 years experience in his field. Tomsic’s plans for the Colfax included a mix of independent films and live performances as well as expanded concessions. He spent most of the year 2013 doing renovations and preparing for the grand re-opening.

Ironically on December 31, 2013, a year to the day after taking over ownership of the Colfax, 64 year old Mr. Tomsic was found unresponsive and pronounced dead in his Colfax residence. Police reported there was no evidence of foul play."

The theatre’s website in reporting Mr. Tomsic’s death currently states “Details about the future of the Colfax Theater will be posted here soon.”

Only time will tell if the community and/or another entrepreneur will step in to fulfill Mr. Tomsic’s vision or come up with another viable plan for re-lighting the Colfax. A realtor’s sign was posted on the front of the vacant structure when I passed through town and stopped to take a few pictures yesterday (March 14, 2014).

Gary began making films while attending McClatchy high school in Sacramento California. Mr. Tomsic was enthusiastic about opening the Colfax theater, as I spoke with him at the Theater one Saturday afternoon in September of 2013. Mr. T had redone the theater with a new digital system. I spoke with him in detail and he was very passionate about opening the theater even after the small hurdles with the county mainly fire/planning. Mr. T invited my girlfriend and I inside the theater, where we reminisced about our teenage years at the theater. The restoration of the Colfax theater was magnificent. He talked about his plans to show independent films and such. Before Gary could successfully open the theater, we sadly we lost Gary at a time that was very exciting for him. Gary had spent all of his inheritance and the theater hadn’t even opened yet. I hope whoever inherited the theater will open it soon.. State of Art and eclectic. again only time will tell… sad but true..

Under the management of new owner and eight year Colfax resident Jim Dion, the Colfax reopened in December 2014, primarily as a live music venue although they have also shown some films since the re-opening.

It’s nice to see that all the hard work of previous owner, the late Gary Tomsic, was not in vain and the Colfax is now open and in good hands once again!

Sadly,the Colfax Theatre is again closed and has been since January 1, 2018. A couple from the S.F. Bay Area purchased it and beautifully renovated it, but made the mistake of primarily using it to stage avant-garde performances, which is not what the local community wanted. As of this writing (July, 2018), the building is vacant and the business is for sale.

The theatre is once again operating.