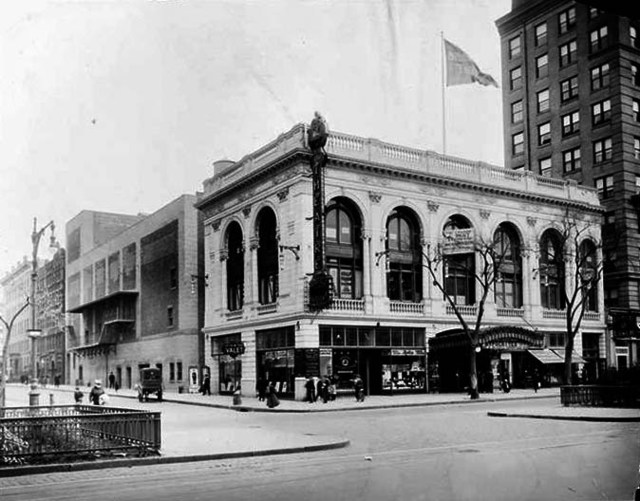 Opened by June 1, 1916, this theatre became part of the Keith-Orpheum Circuit. James Cagney made his acting debut here as a chorus girl. Seating was provided in orchestra, balcony and upper balcony levels. The theatre was later known as the RKO 81st Street Theatre when the Keith-Orpheum became part of RKO. In 1939 the auditorium was remodeled in a Streamline-Moderne style.

It closed in late-December 1953 with Richard Burton in “The Robe”. In 1954 it became a CBS Television Studio named CBS Studio 72.

In 1966 it was briefly used as an off-Broadway live theatre. Last known information was that Conran’s home supply store occupied the former theatre’s upper level.

This theater was CBS’s first color television studio in New York. It was taken over by CBS in 1954. (In fact, it was the second, but it was the first CBS facility to use RCA color cameras, as opposed to their converted black and white cameras that were used for CBS’s own color television system, which was abandoned in 1951.) Probaby the most famous program to originate from this facility, CBS Studio 72, was the live 1957 color broadcast of Rodgers & Hammerstein’s Cinderella. If you want to know more about the early years of color television, check out this link: http://www.novia.net/~ereitan/index.html

If anyone is interested, below is a desciption of the technical facilities in CBS’s (Color) Studio 72.
The description comes from Ed Reitan’s website regarding the history of early color television:

Studio 72 (1954)
New York, Broadway and 81st St.
Theater purchased in early 1954.
Two Control Rooms (Color and B&W with TK-11’s)
Live Cameras (4 – TK-40A’s); Slide, 35mm and 16mm Film Scanners (DuMont 16mm and Philco 35mm). The studio had side by side Monochrome and Color control rooms. Later, 3-vidicon RCA TK-26 Film/Slide chains replaced film scanners in this studio.
This was the first major CBS NTSC color studio. CBS featured a rotating schedule of one-time New York program colorizations including the “Ed Sullivan Show” from Studio 72. The December 25, 1958 “Nutcracker” on “Playhouse 90”, the first color video-taped CBS show, originated from this studio. As colorcasting was progressively slowed on CBS during the late 1950’s, only the monochrome equipment in this studio was used for origination of a number of black and white telecasts including “The Verdict Is Yours”. Harold Deppe worked for CBS at Studio 72. He reported in March, 1997 that between the infrequent CBS colorcasts, none of the color equipment was even regularly powered – so much equipment maintenance had to be done when a rare colorcast was scheduled.

It was not known when Studio 72 was retired. Eventually, only the TK-26 Film Chains from Studio 72 were moved to the Broadcast Center on West 57th Street in the early 60’s. Thus, the only CBS East Coast color capability in the early 1960’s was from film and video tape.

A great article was in the New York Times on Thomas Lamb. The 81st St is one of the theaters pictured in the article:

Here’s a great street view of the old facade of the theater:

The Electric Company was filmed here from ‘71-77.

In 1966, it had a short run as an off-Broadway theatre, showing Isaac Babel’s “Sunset”, Arnold Wesker’s “The Kitchen” (with Rip Torn and Sylvia Miles), and “GI” – after which it became Reeves Teletape Studio, eventually hosting “Sesame Street”. Downstairs is now Staple’s. I was an ASM on “The Kitchen”, and one day while we were hanging lights, an old gentleman in a straw boater walked in and told us he remembered seeing Jimmy Cagney and Rudy Valee on that stage, 30-foot proscenium, runway kind of stage, spiral iron staircase up to the chorus dressing rooms, 60' flies, hemp system in place (and workable). CBS had filled the orchestra with cement to level it for cameras. seats had been removed. Bleachers were put up for Off-B'way shows.