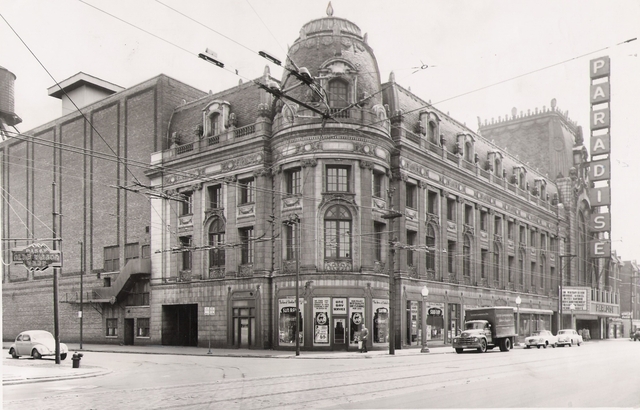 The Paradise Theater, which was built in the Garfield Park neighborhood of Chicago, was billed as the world’s most beautiful theater. It was located on Crawford Avenue (now N. Pulaski Road) near W. Maypole Avenue. It is regarded as one of the finest designs by its architect, John Eberson. The sheer opulence and intricate craftsmanship that went into the theater made it a showpiece in itself. The Paradise Theater opened on September 14, 1928 with Clara Bow in “The Fleet’s In” on the screen and The Ritz Brothers performed on the stage. It was equipped with a Wurlitzer 5 manual, 21 rank organ. It was closed in 1931 and reopened on September 29, 1934 with a new modern sound system, screening Edward G. Robinson in “Man With Two Faces” plus acts on the stage.

Unfortunately, flaws in the design (blamed on the vast domed ceiling in the 3,612-seat auditorium) had been exposed with the advent of talking pictures. Poor acoustics eventually cost the theater its attendance (movie-goers would eventually turn to the nearby Marks Brothers showplace, the 3,931-seat Marbro Theater) and it never recovered.

Unfortunately, in 1956, owners Balaban and Katz decided to demolish the theater and sell the land to a supermarket chain. The theater that was also built to stand forever almost lived up to that claim - what was to have been a six month demolition took two years! The supermarket built on the site is long gone and in 2020 the site houses an auto repair business.

I wonder if this was the inspiration for Styx’s 1981 album of the same name?

I would think so, considering the group hailed from Chicago.

Has anyone got color photographs of the Balaban and Katz Paradise Theatre interior/exterior? When I worked for the former B&K company, I learned that my district manager, Ken Edgerly, had been the last manager of the Paradise. Although he followed company protocol—which was to show no sympathy or love of the old palaces, his wife informed me several times in his presence that for almost a year after he closed the Paradise, he visited almost nightly. After he’d close his current theatre, he’d drive across Chicago to check on his beloved Paradise. Because of Ken Edgerly, not to mention my own mother’s love of the Paradise when it was a young theatre, I would truly appreciate being able to see color photos of the place.

<< I notice that the main entrance to the strip mall at the SE corner of Pulaski and Madison has the word “PARADISE” in large letters above the doors. >>

That’s the old Goldblatt’s store, the onetime anchor of the Madison-Pulaski shopping district. My mother’s family lived on the West Side for about ten years in the 50s and early 60s, and she remembered shopping there many times (no memories of the Paradise, unfortunately)…perhaps her most painful memory of the 1960s was seeing the Goldblatt’s being looted on the TV news during the King riots.

Right. It’s the Goldblatt’s site, not the store, which is long gone. I loved that place, especially the candy counter and the toy department.

The toy department was wonderful Scott…Isn’t that where they had the live robot “Tobor” or something like that displayed with the hands and eyes moving.. It would be around 1955-56. The Paradise was still hanging on barely. A tragedy in the making..

Bobby, I don’t remember the robot, unfortunately. But for some reason I remember buying a camera there for 75 cents, and it took great pictures! Lots of wonderful toys there. I’m glad there was no Amazon back then. As for the Paradise, I think we’re lucky it hung around as long as it did. My understanding is that it had been losing money for many years.

Thanks DavidZornig for photo. What a vertical! I wonder how often they had to change the many burned out bulbs? Or the high ladders they used.

It was fantastic, a genuine movie palace for sure. TV and a changing hood destroyed it !!