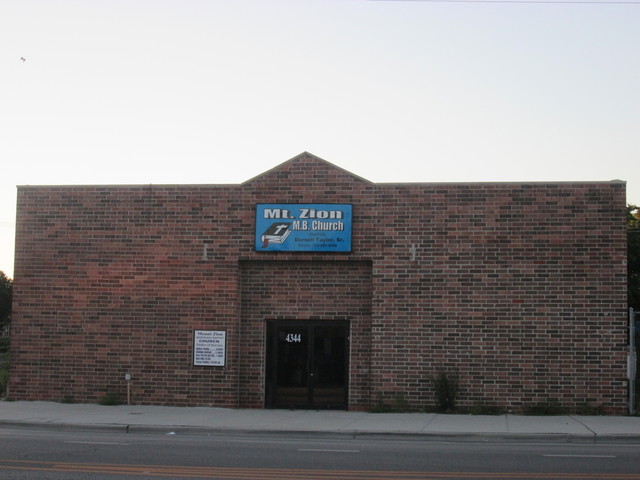 The Savoy Theatre opened in 1913, in the West Garfield Park neighborhood, on W. Madison Street, between S. Kildare Avenue and S. Kostner Avenue.

It could seat just under 500 and was built for the Simansky & Miller circuit. It was soon after taken over by the Lynch circuit, and by the 1930’s, was independently operated.

The Savoy Theatre was closed in the early-1950’s, and later became a church, a use it retains today.

The Savoy is still standing. Today it functions at Mount Zion Missionary Baptist Church, and it was formerly Holy Raiders Revivals Church. The address is 4344 West Madison. A brick faÃ§ade added in the 1980s conceals the original. The 2005 book How The Other Half Worships by Camilo JosÃ© Vergara features photographs of this building from 1981, 1989, and 2003.

I believe this theater was shown in a 1953 theater owners' documentary about the financial devastation wrought by the 20% federal tax, plus other encroachments on the box office, such as television.

I would have liked to see the original facade. This church does not inspire confidence in the neighborhood with that look! More like a fortress!

A permit had been applied for to build a one-story brick theater, 140x50 feet, at 4346 W.Madison Street, according to the October 12, 1912, issue of Construction News. Owner of the project was Leopold Semon, the architect was C. W. Christiansen (or perhaps Christianson— I’ve seen both spellings, but can’t confirm either as correct.)