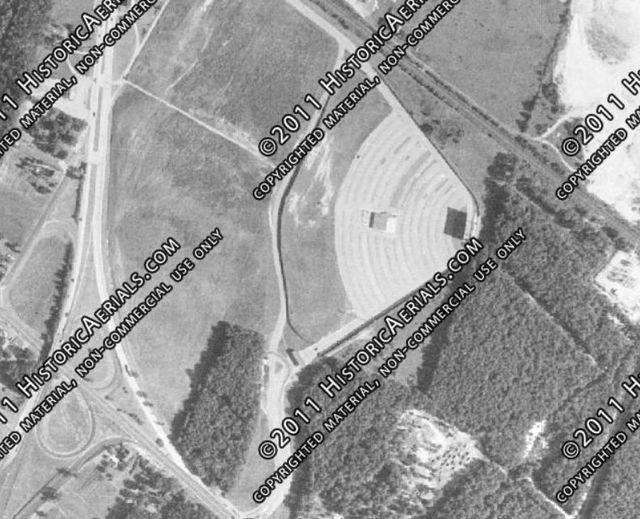 The Atco Drive-In opened August 5, 1955. Located at Routes 30 and 73, this drive-in was a longtime landmark for travelers to and from Atlantic City and other Jersey Shore points. It was one of the rare drive-ins to have a "day job," serving during weekday daylight hours as a motor vehicle inspection station for the New Jersey DMV.

Last operated by National Amusements, who closed it in September 21, 1989. It was replaced with the now-closed Atco Multiplex Cinemas on a portion of the site. Parking for the Atco station of New Jersey Transit’s Atlantic City train line occupies another part of the former drive-in.

The multi-plex has been torn down, and the entire site is for sale. There are construction vehicles present on the grounds.

This time last year (January 2012) the grading was still apparent for the drive-in.

I’m 64 and watched the drive-in being built in 1956. My dad owned Sadler’s Tavern two doors down on The White Horse Pike. The first movie I saw there was The Creature From The Black Lagoon. I played on the swings and monkey bars til it got dark and the cartoon came on. My dad and brothers would walk at dusk to the rear of the property to watch the movie with no sound. In 1972 I was stationed at Fort Dix and brought a date with two bottles of Boones Farm Strawberry Hill wine and didn’t see the movie. In the 70’s the Country Western Tavern was booming. Being from Philly I brought my aunt to see the place in the 80’s but learned it burned to the ground. The new 14 theaters were just being built then. I moved to Connecticut with my family in 1959 but always treasured my memory of Atco NJ and the Drive In.

The Atco Drive-In was built on only a portion of a much larger tract of land in 1956. The drive-in, now owned by National Amusements, Inc. of Deadham, Mass., closed in September of 1989.

The Atco Multiplex Cinamas was built along the White Horse Pike in 1990, in front of the drive-in on 39.4 acres of undeveloped land.

The Multiplex was closed in September of 2008 and demolished, leaving behind hundreds of parking spaces on acres of asphalt.

Near the barracaded entrance on White Horse Pike is a sign that reads — AVAILABLE 39.4 Acres.

Behind it, among the weeds, lies the abandoned Atco Drive-In.

The Amboys Multiplex, also own ed by National Amusements and on the site of the former Amboys Drive in is also for sale. Our building has yet to be demolished, having closed on May 25, 2005. Also on 39.5 acres.

Final night of operation, per last known ad in the Courier-Post, was September 21, 1989 with “Turner & Hooch” and “Three Fugitives” on the Blue Screen, and “Indiana Jones and the Last Crusade” and “Lethal Weapon 2” on the Red Screen.