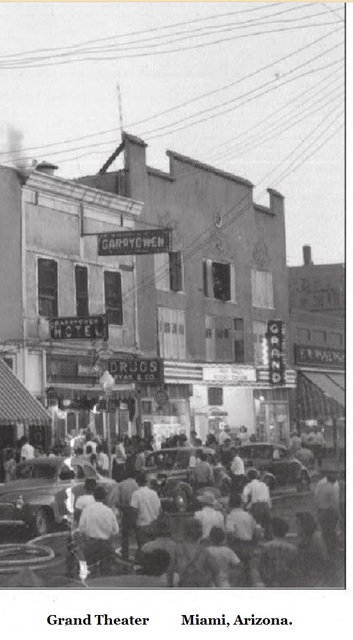 The Grand Theatre was opened in September 1929, and was built on the site of the Liberty Theatre. Seating was listed at 775. The theatre closed in early January 1975 and has since been demolished. There is a small city park where the theatre once stood.

The Grand Theatre was constructed in the same footprint of its predecessor, the Liberty Theatre, a silent operation which was removed down to the foundation and reconstructed in 1929 built as a $100,000 talkie theater with Movietone and Vitaphone sound systems. It opened in September 1929 for Nenes and Souris who had owned the original and updated Lyric Theater in Miami. A sold out audience was impressed by the Spanish Architecture and the fabulous interior design of Charles Weissenborn who had decorated theaters in Los Angeles, Seattle, Fairbanks, as well as theaters in Montana and Oregon.

The Grand — which hosted union activities — was closed briefly during a strike in summer of 1971. Advertisements run until “Last Tango in Paris” ending January 29, 1975 which may (or may not) be the theater’s closing date. It advertised for decades at 615 Sullivan Street. So not sure the source of the opening dates, closing dates and address above, but feel confident about this info.

I’m curious about some of the information by “dallasmovietheaters”. My mother is the daughter of one of the owners, John Kresos, who is not listed in your comment. She is still alive and helping to contribute to the exhibit at the Bullion Plaza Museum in Miami, AZ about the Grand Theater. The museum (and our family) would appreciate any information and sources you have if you would like to contribute. Thank you for what you have posted here.

This item from the May 9, 1919 issue of Southwest Builder and Contractor might be about the Liberty Theatre, the Grand’s predecessor:

“Miami, Ariz.– Work will be started at once on a new theater to be erected on the property of Charles Goodwin for Theodore Souris, Peter Souris and John Kresos, proprietors of the Lyric Theater. The building will be fireproof and will seat about 700.”