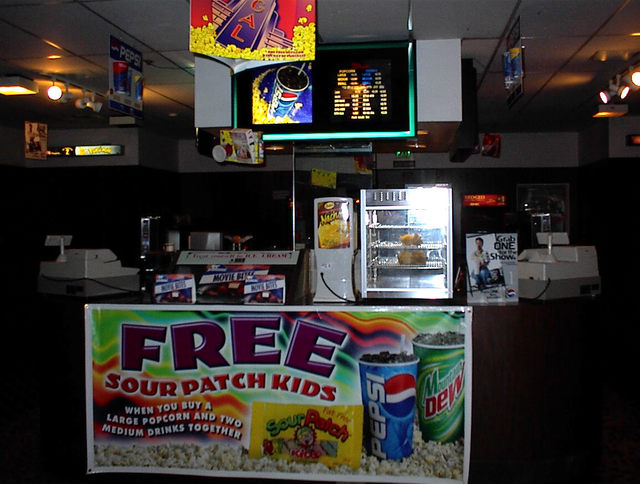 You would have thought a G-rated film might have been booked for the kids on opening week, since all they opened with were, for the most part, adult movies.

This might have opened as a Sterling Recreation Organization Theatre.

New member to this website, been visiting it quite a bit in the last few weeks and decided to join in.

The actual address for the Metro 4 was 2588 N. Columbia Center Blvd., in what is known as Rivers Edge Plaza. I had seen a number of films here, including “Just One Of The Guys”, and the theaters also hosted a Tri-Cities International Film Festival, when I also saw “The Myth Of Fingerprints”, “Shanghai Triad”, “Four Rooms”, and a number of others. It was a budget theater that would normally show second-run films, and cost throughout the 80’s and 90’s was $2. As far as theater capacity, I’m not sure of the actual amount but maybe 150 to 200 people in each of the four theaters.

It was fairly common for high school students (and some adults) to pay for one movie, and then actually move from theater to theater throughout the day, as the employees didn’t care too much. When a certain theater inside would have a double feature, it might be easy to see four to five films a day.

Upon its closure, it was closed for a few years before it turned into a Mexican restaurant and nightclub called Club Paradise (later The Jungle), lasting for a year. It then became Danilo’s Italian restaurant before it moved on and turned to Santilli’s.

Found this photo that will be of interest. Metro 4 did not have any windows, but were put in when Club Paradise was built. In this picture, taken apparently when the club shut down, you’ll see the windows, along with the front door where the lobby was and the box office. The tree design was new to the club, not there as Metro 4. http://i50.tinypic.com/2qiwe1y.jpg

The building within the plaza has seen a number of other businesses come and go in the last few days, including a restaurant called Roy’s Chuckwagon (or Western Smorgy). There is a music store there that has been there forever, along with a Chuck E. Cheese’s.

The building that housed or houses Roy’s Smorgy, the music store and Chuck E Cheese’s used to be a ValuMart store, a chain retail store that predated K-Mart’s arrival. I used to buy records there – it was a favorite of mine.

I think this is Kennewick and not Richland?

Those pesky Richland government types, actually had ownership of everything on the Columbia River Side of the highway. Once you cross the highway, it becomes Kennewick.
My understanding was that the Columbia Center development was a bitter pill to swallow, in that Kennewick had the vision, and Richland did not. Not sure of the politics,but Richland owned everything riverside, including the Island View Drive in. They were not real happy they missed the boat on developing the premier shopping area for all 3 cities. So much, that the development that Metro 4 was in was named “Columbia Center North” for quite a while. When the M4 opened, it was not SRO, it was another chain. TOI I believe, Theatre Operators Incorporated, SRO (Sterling Recreation Organization owned by the Danz family out of Bellevue, same company that owned radio station KALE and OK-95) bought it in its first week of operation, in order to keep its lock on the Tri-Cities movie goers.
Horrible seating, with the aisle right down the middle and undersized screens, and no stereo sound, but at the time, no one really complained…