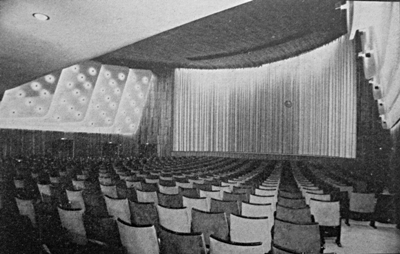 Originally on this site was the Lessing Theatre, which Ufa took over in 1917. It was demolished and the new Ufa Palast was built and opened in 1929. Designed by the architectural firm Bloch & Hochfield, the huge 2,700-seat cinema formed part of an office building named the German House. Inside the auditorium, seating was provided in orchestra and balcony levels. There was a huge laylight in the ceiling, which was set in a cove, iluminated by a trough of concealed lighting. The cinema had a fully equipped stage and stage house.

It was badly damaged by allied bombing in 1943 and closed. After the end of World War II, it was repaired and taken over by the British Army to be used as a military theatre. They vacated the building in 1956, and the building quickly deteriorated. It was demolished in March 1957.

A new 988-seat Ufa Palast was built on the site. Designed by architects Kluppelberg Lichtenhahn, it became the premier cinema in the city from its opening on 26th February 1958. It was expanded and re-opened as a 2,000-seat 7-screen multiplex on 20th September 1974.