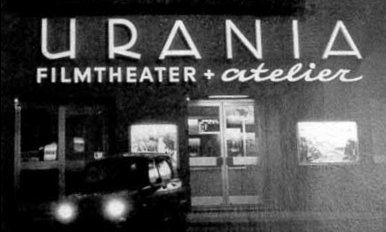 Originally built as a lecture theatre in 1911, seating was provided on orchestra and balcony levels. It later became a YMCA gymnasium and prayer room. In the 1930’s it was in use for films and stage shows. It was seized by the authorities in 1945.

The Urania Filmbuhne re-opened in 1949 as a military cinema. In October 1956 modernised and equipped with CinemaScope, it became a 650-seat public cinema showing first-run films. It was renovated in 1967 and a second small 122-seat Studio screen was added in the basement. The Urania Filmbuhne was destroyed by a fire on 6th June 1980.