The seven screen Station Square Cinemas was opened by Famous Players on December 16, 1988. The theatre is located on the second level next to the Metro Town Mall. Seating is listed at 1,998 with the smallest auditorium seating 196 and the largest seating 498.

Cineplex Odeon took over operations of the theatre in 2005. The theatre featured first run attractions. It was closed on September 3, 2012.

CWalczak: Was there a second, separate Station Square Cinemas as well? CinemaTour has photos of a closed on at the same address as this one at http://www.cinematour.com/tour/ca/3064.html as well.

Yes there was also a Cineplex Odeon Station Square at the same time, so that must be the one in cinematour. It closed and the FP one still survives.

The Cineplex Odeon Station Square closed in early 2002. It had five large screens and was right across from the Famous Players theater. Last I was there the space was being used as an art/print shop, although that could be gone by now.

That’s right. I forgot they actually had a Cineplex and Famous Players right across from one another. I guess this made sense at the time when each chain had exclusive rights from the major studios.

These exclusive deals semmed to go out the window when the 18-plex Silver City theatres popped up.

Cineplex pretty much uses the Station Square now as a “move over” from nearby, 10 screen Silvercity Metropolis; in other words, it’s 17 screens but in two buildings. Strange thing is, Station Square is still all 35mm and Metropolis is all digital now. Time will tell if this cinema stays open…

Station Square 7 to close on September 3rd, 2012. Which is not surprising as Cineplex never updated to digital at this location. I took photos recently and will add more to the site soon. http://www.cineplex.com/Theatres/TheatreDetails/Famous-Players-Station-Square-Cinemas.aspx

Status should now read closed. Station Square is no longer listed on the Cineplex website.

Three cinemas and an 4th theatre reopening after renovations all opened on December 16th, 1988. Grand opening ads in the photo sections. 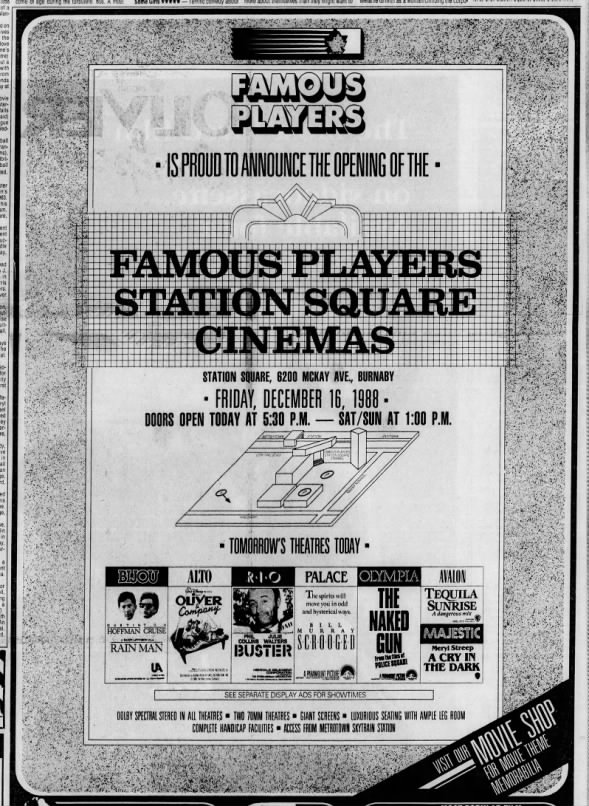