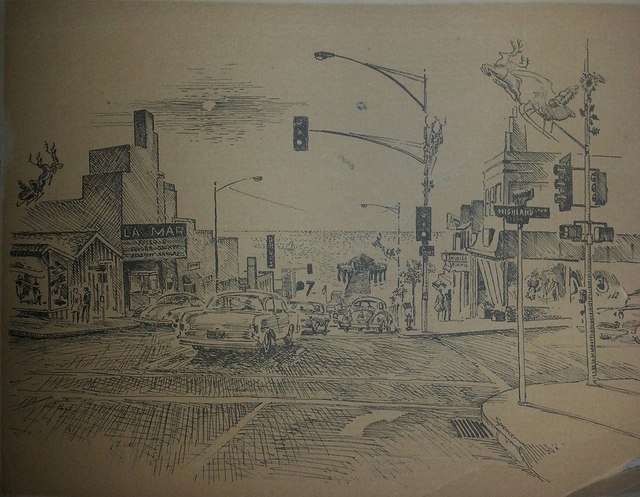 Opened in 1938, the La Mar Theatre. By 1943 it was operated by Fox West Coast Theatres. It was triplexed in the early-1970’s and was closed and demolished in the latter part of that same decade.

There are no longer any movie theaters in downtown Manhattan Beach.

Southwest Builder & Contractor of November 5, 1937, named Clifford Balch as the architect of the La Mar.

Though I grew up in the San Gabriel Valley, my dad was born in Manhattan Beach in 1909, and we often visited his friends who still lived there in later years. I never saw a movie at the La Mar, but I passed by it many times in the 1950s-60s. I remember that it seemed pretty plushy for a neighborhood theatre.

One of Sun International’s cheesy films was playing at the La Mar in January 1973, per this LA Times ad. I remember seeing such Sun classics as “Search for Noah’s Ark” and “Search for Historic Jesus”. They always used the same portentous narrator.
http://tinyurl.com/22u52o

Exterior of the La Mar Theatre

Two years since any submissions regarding the La Mar, huh? Ah, well. My brother and I spent many a Saturday afternoon here in the late 50s and early 60s. Back in those days kids ran wild; out of the house after breakfast and gone until dinner. My parents would give us a buck (35 cents for admission, 15 cents for popcorn times two kids) and we’d see two movies with cartoons in between and participate in a drawing where they’d call out the numbers on the ticket stubs and if they called yours you’d win a big “Charms” sucker. You’d even get to go up on stage (remember when theaters had stages?) to verify your number and receive your prize. I recall that Disney movies were 50 cents instead of 35, and when The Beatles' “A Hard Days Night” was shown it was 60 cents; we knew at that point that the good old days were behind us. Never as elaborate as the Fox Redondo or the Strand (what, no balcony?) my best memories are still of the La Mar. I moved away so I didn’t witness the decline and destruction and I’m glad. It was the perfect small town movie house, back when Manhattan was indeed a small town.

I went to the La Mar often during the years I lived in Manhattan Beach during the 60s. For a couple of those years, I lived at 903 Highland and would walk the short distance. A typical small theater from the 30-40s construction period. Well-maintained during the years I attended.

It’s ironic that the only areas where the old theaters remain (in whatever form) are those that are economically-depressed. In Manhattan Beach and the South Bay, land is too valuable.

BTW, A pictorial history published by the Manhattan Beach Historical Society shows the construction and opening of the La Mar in 1938, rather than the 1943 listed above.

As Mrwillmrr noted, the opening year currently given in the intro is wrong. Boxoffice of August 28, 1948, said that the La Mar Theatre had just celebrated the tenth anniversary of its opening. Also note the 1937 Southwest Builder & Contractor article mentioned in my earlier comment which said that Clifford Balch would be the architect of the new theater to be built at Manhattan Beach.

i have many memories of going to the la mar theatre. i saw the incredible shrinking man there. i lived on 10th street and harkness back then .i would walk all the way to the la mar then go on down to the pier where we had a friend who lived on the strand. we would store our surfboards there. great memories of the 50s and 60s

During the 1950s La Mar’s Saturday matinees were a worship center for kids like me (refugees from Opal Robinson Elementary). Images of the original Batman (1943 b & w, anti-Japaneese propaganda serial starring Lewis Wilson & Douglas Croft as “Robin”), all the Charlie Chan flix plus best of genre Westerns such as the collaborations of John Ford & John Wayne/ James Stewart- Anthony Mann/ Bud Boetticher + Randolph Scott, etc. All us kids knew how to treat a faithful dog or horse but we didn’t mess with girls because they all had cooties. Yuk!

The La Mar wasn’t everybody’s theater but it was most certainly mine during those formative years and maybe that’s why I remember that vivid evening toward the end of July, 1957 when the theater was overwhelmed by police officers & other adults. It was a fund raiser- memorial service for two officers from a neighboring city who had been gunned down by someone who ran a red light. This was destined to go unsolved for 45 years until Gerald F. Mason was finally apprehended, confessed & indicted for the double murder.

Good childhood memories mixed with disturbing ones are what swirl around the teen shoe store Sketchers which was built on the site where the deer and the antelope used to play just up from the Manhattan Beach pier. And I did bridge the gap on the cooties thing. Even wound up marrying one them 23 years ago. I guess that’s what they call progress today.