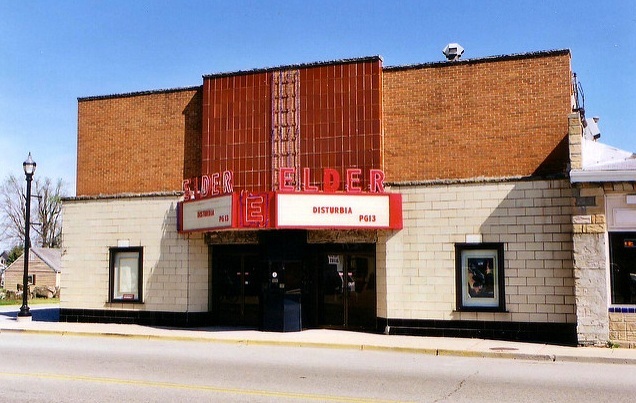 The Elder Theatre was opened on November 19, 1942 with Ann Miller in “Priorities on Parade” Operated by Elder Duff, it was designed in Streamline Moderne style to the plans of architect Fred W. Strezel. It had around 500-seats. The Elder Theatre was the first theater in Ohio to feature a cry room, with soundproof glass, rocking chairs and cribs. It was designed so the screen was still clearly visible, but obviously the sound could not be heard. Originally, the Elder’s staff was entirely female, and all wore navy and gold uniforms.

The Elder Theatre went through two ownership changes after Elder Duff sold his theater in 1949, until it was closed in 1981. Rodney and Becky Miller purchased the Elder Theatre in 1982, and while it was in the midst being renovated and restored, it was reopened, in late 1982, with “Rocky III”.

The Millers put much effort into improving the aging house, including new paint, carpeting, a restored marquee, and a new concession area, carved out of the former standee area, at the rear of the Elder’s auditorium. (Which the Millers would repeat in 1986 when they renovated the Ada Theatre). At this time, seating was also reduced to 375.

New projection and sound equipment was installed, and a new screen replaced the Cinemascope-era screen installed in the Elder Theatre in the 1950’s.

The Millers celebrated the Elder’s 50th anniversary in 1992 by screening the classic “Casablanca”, with admission prices of thirty cents for adults and ten cents for children, as in 1942. In recent years it was operated by M.E. Theatres and is now independently operated.

Jackson Center is the home of Airstream. The crying room feature is something I ran across while visiting the former Judy Theatre in Hartwell GA. That theatre was a quonset hut and is now being used as a warehouse for the local Ace Hardware Store.

Here is another photo:
http://tinyurl.com/yzm737t

Has this been sold? we are looking for a theater lease or lease to buy

On Nov 26 2012 the Elder Theatre was 70 years old. The currant owners have operated it for 30 years. The Elder is still for sell for info

The new digital projector was installed in Oct 2013. In Dec 2013 the new silver screen was installed in preparation of being able to show 3D movies in 2014. The sound system was also upgraded at that time.

The Elder Theatre launched November 19, 1942 with “Priorities on Parade.” The architect was Fred W. Srezel.