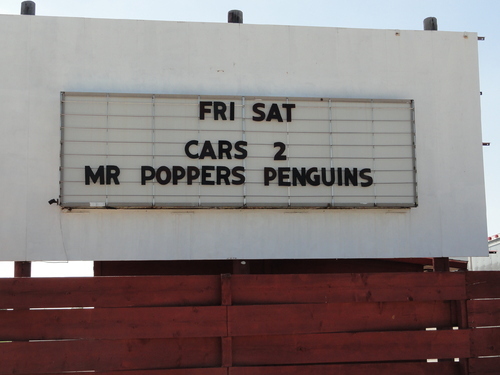 The Sidney Auto-Vue Drive-In has been open since 1956. The car capacity is 450 cars. The drive-in is family friendly trying to show movies that would appeal to the entire family. It operates seasonally from May thru September. The have digital projection and sound thru FM radio. They don’t have a website but keep everyone informed on their Facebook page.

The V in vue should be lower case the way I had submitted it. It is the Sidney Auto-vue. Their facebook page

In February 2015, after a drive-in association meeting in Florida, the owner of the Transit in Lockport NY started walking from Kissimmee toward New Jersey, birthplace of drive-in theaters, to raise money and awareness for the Auto-vue. Several outlets picked up the story, and radio station WKSU wrote, “The Auto-Vue is owned by Teresa Covington’s parents, and she runs the theater. … Covington’s parents turn 81 this year, and she has been working alongside them since they bought the drive-in in 1986. She got in touch with Cohen for brainstorming ideas.”

After a while, I found an East Niagara Post article from May (!) 2015 that reported that Transit owner Rick Cohen made it over 250 miles to Ridgeland SC before a sprained ankle make him quit. Meanwhile, the Auto-vue took out a loan for the digital projector it needed, but with $8000 raised from the fundraising walk to lower its cost. “I give them a lot of credit for having the courage to move forward,” Cohen said.

And I’m a little confused about the exact name these days. The Facebook page is titled Sidney Auto-vue, but its posts (including one from yesterday) call it Auto Vue. The title at the top of its home page is Auto Vue. The owner’s 2014 Kickstarter repeatedly calls it the Auto Vue. So the way I see it, the Facebook page title is the outlier and the correct name should be Auto Vue. Phew!

My Theatre Catalogs through 1955 list only the Sidney Drive-In for Sidney. The 1959 IMPA lists both the Sidney and the Auto Vue. By the 1963 edition, there was just the Auto Vue.

Now combine that with this from its Kickstarter: “Built in 1956 by the Nagelspach brothers, the Auto Vue was purchased by its present owner, the Rees family, in 1987.”

So where was the first Sidney Drive-In located at?

Ok, in answer to that last question, there just so happens to be an Historic Aerial from 1959 over the area. I did some scanning and found a Drive-In north of Sidney at the corner of Sharp Road and Sidney-Wapokaneta Road, also known as County Road 25A South. 10001 County Road 25A South, Sidney, OH appears to work for Google, there is a church on the site. I can’t get that address to work for Historic Aerials though, so I used 14150 Sharp Rd, Sidney, OH 45365 for that. That maps to a trucking company on the south side of the street across from where the Drive In was. The drive in is fully visible in the 1959 Historic Aerial, the outline/ramps are visible in the 1972, 1981 and very faintly in the 1994 one. By the 2004 one pretty much all trace of it is gone.

Here to you GO It was the Sidney Drive-In.