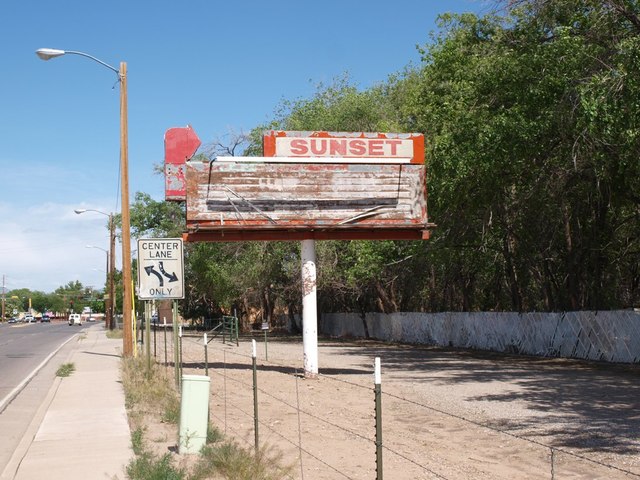 The screen, concessions stand, & ticket booth are all still standing. It is fenced off, with ‘NO Trespassing’ signs aligned the area! By late-2021 the concession stand/projection building had been demolished.

The good ol' Sunset Drive In. I worked there during the 80’s when I was in high school. Good times.

The owner was active enough recently to turn down a request “to project a message of love on its tattered screen,” according to a Valentine’s Day 2018 article in the Albuquerque Journal.

brought by a chicago couple who will turn into a farm which will also have a farm to table restraunt and yes they plan on showing films!

Opened with “Thats my boy” and “Streets of Laredo”.

An ad in the July 11, 1981 Albuquerque Journal showed the Sunset under the Commonwealth banner showing a Spanish-language film.

Journal ads for the Sunset in 1987 and 1988, not under Commonwealth, listed English-language movies. I couldn’t find any similar ads in 1989.

I guess that D. Armino reopened the Sunset (if it had closed) in 1987. That’s when I started seeing English-language movie ads for the Sunset, and would account for the Motion Picture Almanac listing in 1988. The final ad I found was for “Die Hard” and “License To Drive” on Sept. 25, 1988.

An Albuquerque Tribune columnist wrote in Nov. 2, 1995 noted that the Sunset was still standing “as it had for years, though locked behind barbed wire and chain-link fence, unkempt and neglected … A plywood sign on the ticket booth said, “Open May 31.” “

An April, 2021 Google Street view shows the entire area has been cleared. A building has been constructed near the former location of the concession stand/projection booth. And a house has been built in the NW corner.

The screen and marquee still stands, although the marquee is still in relatively poor condition.

I found a final-er ad for the Sunset in the Albuquerque Journal. Now I’d say that the last one was on Sept. 1, 1990, showing “Gremlins II”.

And I may have found the slightly misspelled D. Armino.

Albuquerque Journal, May 12, 2009: “The Sunset opened in the early ‘50s, built by a hard-working couple, Marlin and Carrie Butler, who years later, coincidentally became Caroline’s (Armijo Butler, 60) in-laws. Opened a wholesome family place, the Butlers did, and poured their hearts into it, till 1967 … Caroline’s father, David Armijo, owned the land. All the rest – exit signs, popcorn machine, restrooms, was leased.”