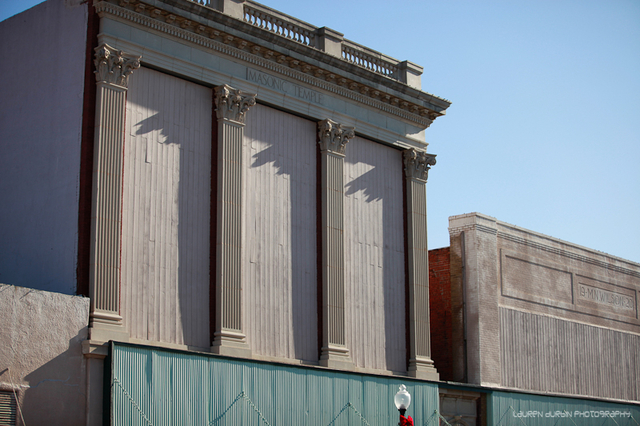 For many years it has been assumed that the old El Reno Theatre had been torn down. This is probably due to the fact that the beautiful Greek Revival façade was stripped away and replaced with a modern stucco façade. The stage house was razed, and auditorium space converted to retail use. As time passed people just forgot that hiding behind all that stucco is a grand theatre. Yes, the building does still stand to this very day at 106 N. Bickford Avenue.

Opened with a live play on April 1, 1893 as the El Reno Opera House, this luxurious theatre originally presented big time stage shows and special events. It was renamed El Reno Theatre in 1907 when it began presenting movies & live events. It was destroyed by fire on December 26, 1918.

A new El Reno Theatre was built and opened on May 12, 1919 (It has its own page on Cinema Treasures). When talkies arrived on the scene in the late-1920’s the house added a projection booth, silver screen, and was wired for sound. Being located in the center of theatre row helped the El Reno Theatre to succeed in its new role as a movie house.

A vintage image of this theatre can be seen on this link. Go to match all words and type in
“el reno opera house"
View link

A modern day view of the El Reno Theatre can be seen here,
View link

An Oct 1, 1920 article in The Porum Journal mentions that “work is being rushed” to complete a new opera house, and that the El Reno Theatre was destroyed by fire in 1919. Possibly the existing building is #2.

Cinema Tour has some photos of the El Reno.

The El Reno Opera House opened April 1, 1893 with a live play. At its 15-year mark, the El Reno Opera House turned to a mixture of live events and motion pictures generally going by its new moniker of as the El Reno Theatre in 1907. The venue was destroyed by fire on December 26, 1918 and rebuilt following its final event which was a live play titled, “Freckles.” The “new” El Reno Theatre relaunched in its new building on May 12, 1919 with motion pictures and Harold Lockwood in “Shadows of Suspicion" and has its own Cinema Treasure page.