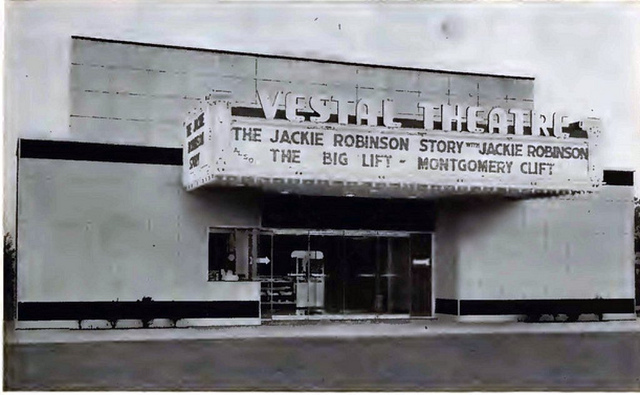 An unremarkable theatre serving the Vestal/West Corners area of the Triple Cities (Binghamton, Johnson City, Endicott.) I definitely remember a fire closed the theatre for awhile but don’t remember if the theatre reopened after that. The Vestal Theatre was where I saw "Polyanna" and "The Parent Trap."

Need an address or crossroads, more info and photos.

The theater was a quonsethut that opened in the late 50’s/early 60’s, and was gone by the mid-70’s. The building was on the Vestal Parkway and has been demolished.

An ad for the Pittsburgh Plate Glass Company in the January 6, 1951, issue of Boxoffice featured a photo of the Vestal Theatre’s streamlined facade.

In other news, I’m hearing that Bowtie has backed out of coming to Brandywine, MD. If so, it is a real black eye on Bowtie’s reputation.

I saw “Wait Until Dark”, staring Audrey Hepburn and Alan Arkin, in this theater in 1967 with my girlfriend Lorraine. Right at the scariest part the man behind us had an epileptic fit. The movie was stopped and the Paramedics(they just called them ambulance drivers then) took him away and the movie was restarted.

The Vestal Theater was indeed a quonset hut, with dark blue walls (that curved up to become a dark blue ceiling…that’s what quonsets did). The theater was very long, and necessarily narrow due to the design. When CinemaScope arrived in the mid-1950s, the screen was not at all wide, and the projection “throw” was so long, the picture wasn’t especially bright. This theater was one of the first, however, to add stereo sound, maybe to spread the sound through the auditorium more efficiently?

My recollection of this theatre is that after closure it operated for one year as a roller skating rink before undergoing demolition around 1978, slightly later than Joe Masher suggests above.

This opened on August 3rd, 1948. Grand opening ad in the photo section