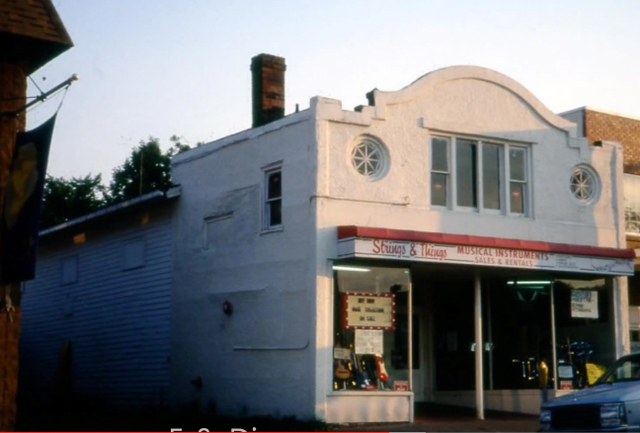 The first theater in Endicott’s westside Union district was not the Elvin Theater, but the more humble (but less humbly named) Royal Theater, which was located on W. Main Street. It was open by April 1914 on a part-time basis for local theatricals, and expanded to a combined movie and theatre venue shortly therafter.

The Royal Theater had no less than four managers during its short existence. In September 1922, in an item on the front page of the local paper otherwise given over to the grand opening of the larger and more modern Elvin Theatre just across W. Main Street, the Royal Theater announced it would hereby be reducing its admission to a nickel (it had previously been a dime), in a call back to the “old days” of nickelodeons. It was a brave effort, but with the new competition just across the street the writing was on the wall, and in April 1923 it was announced the theater would be taken over for use as a City Mission for the Union district.

Fascinatingly, unlike the Elvin Theater, this building still stands. When I first tracked it down in the 1980’s, it was in use as a second-hand clothing store. On stepping in the building I was amazed to find that much of the strucutral earmarks of the early theater remained intact. The projection booth still existed as a loft area, and the auditorium portion, while leveled, still retained the high ceilings and ornate ceiling squares typical of the era.

I relocated the building again last year, but sadly, it was in the process of being remodeled from commercial to apartment use. On the plus side, whoever is doing the redecoration has uncovered and spruced up the original facade, including getting new glass cut for the odd-shaped windows typical for theaters of the era. As a result, on the outside at least, once it draws your eye, the building clearly shows its origins as a 1910s-era theater.

The Royal and the Elvin were even closer than “a few blocks—” they were nearly across Main St from one another. Adam Marsland points out that while the Elvin was demolished (?1961) the Royal still stands in altered state. I can add that the State, a block to the east, opened in 1939 and later renamed the Cinema, has also been lost. Thus the oldest still stands, while those which overcame it are gone.