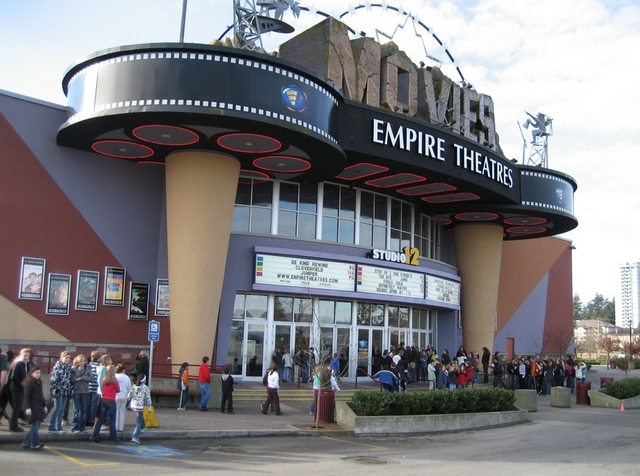 Seating capacity was listed at 3,450 with the smallest auditorium listed at 163 and the largest at 389. The theatre features first run attractions and a special almost half price admission on Reel Tuesdays. It was taken over by Landmark Theatres in 2013. In early-2017 new seating was installed, giving a reduced seating capacity of 1,384.

This should be renamed as the Landmark 12 Guildford, as Landmark Cinemas took this theatre over in October 2013 as part of its acquisition of Empire’s Western Canada and Ontario theatres.

A few more updates on this site:

The original twin theater opened in July 1977, and was inside the mall. The Spy Who Loved Me, and The Rescuers were the opening films.

The twin in the mall closed in August 1986, and then re-opened in the new building in the parking lot as a 4-plex.

The 4-plex opened on Oct 31, 1986 with the following films: Crocodile Dundee, Trick or Treat, The Color of Money and Children of a Lesser God.

This complex existed until November 1998, when it was incorporated and renovated into it’s current configuration as a 12-plex.

This opened on January 20th, 1967 as the 2nd theatre in the North American Cinema Centres with their first being Cinéma Place Longueuil near Montréal. Later in 1967, It became part of NGC Cinemas (Canada). Grand opening ad in the photo section. 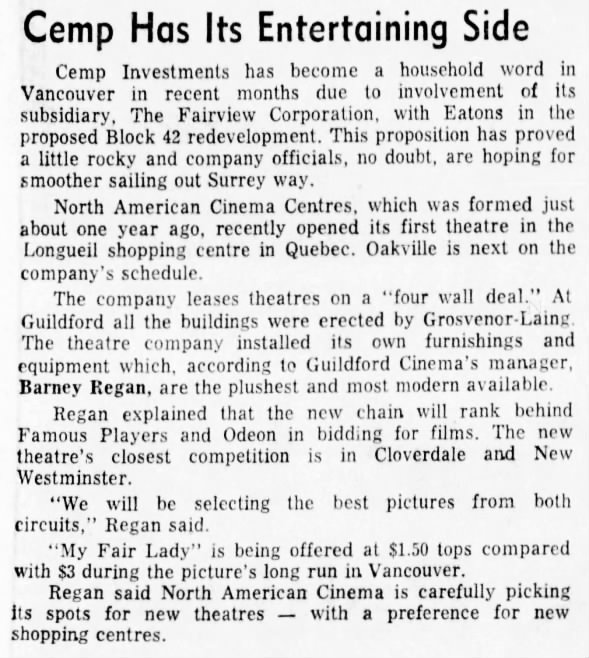 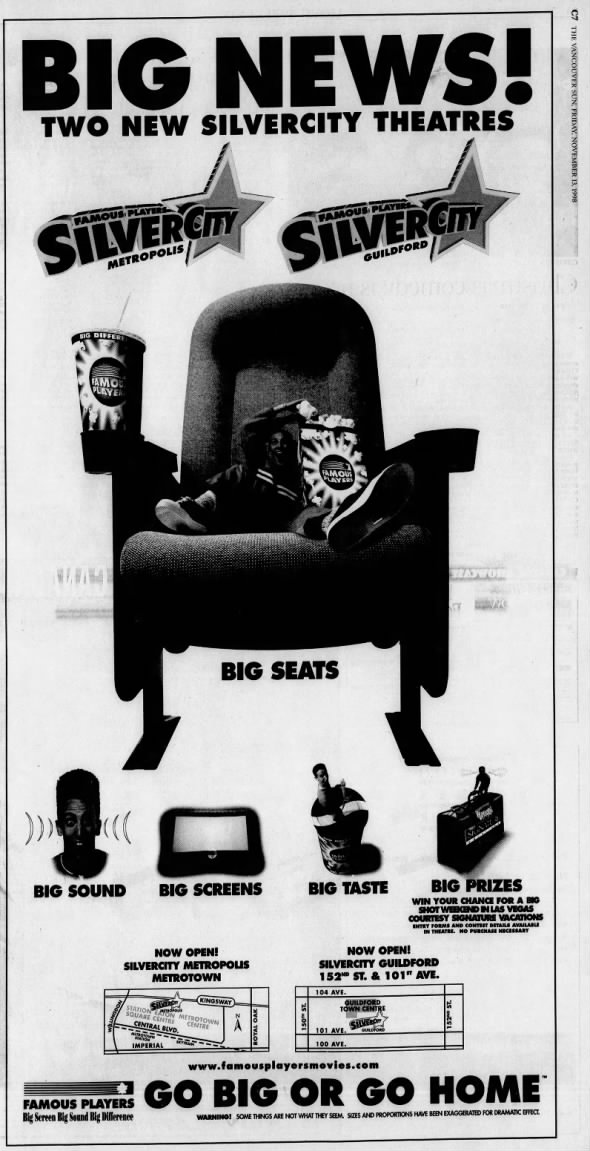 Curious to know where this single screen from 1967 was located. Guildford Mall wasn’t constructed yet from what I’ve seen looking at the blueprints. The Twin was in the mall and opened in 1977. Do you know where it was, Rivest?

Renovated in late 2016/ early 2017 which saw lobby upgrades, a new concession stand and recliner seating installed in all 12 auditoriums (bringing the seat count down to an estimated 1384 seats). In addition, Screen #4 saw an upgrade in July 2020 where it was branded as LaserUltra with the installation of laser projection and Dolby Atmos sound.

This theatre opened with My Fair Lady on January 20, 1967. On July 22, 1977, it re-opened with The Spy Who Loved Me and The Rescuers when it was twinned. On October 24, 1986, it expanded to four screens and re-opened with The Color of Money, Crocodile Dundee, Children of a Lesser God and Trick o Treat. When it expanded to 12 screens on November 13, 1998, it re-opened with The Waterboy, I’ll Be Home for Christmas, John Carpenter’s Vampires, The Siege, Antz, Meet Joe Black, Practical Magic, and I Still Know What You Did Last Summer. Also, contrary to the description, it didn’t expand further in 2005.