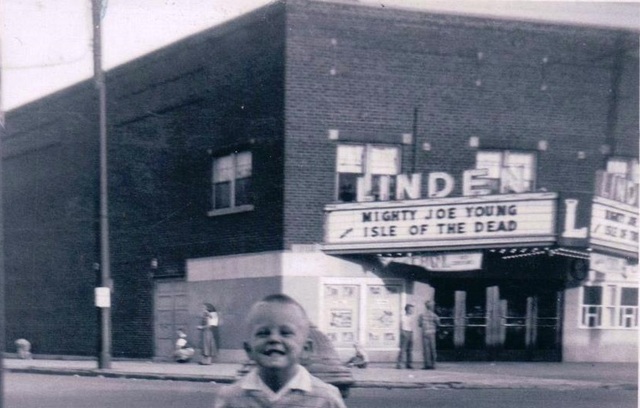 The Linden Theater opened in 1926. It operated until January 1, 1946, when it suffered damage in a fire. Repairs were carried out and it re-opened and operated until the mid-1960’s

The land was purchased by the Columbus Public library for a parking lot site on December 9, 1965. One owner was Frank Marzetti.

it’s on the far left in this pic
View link

the library opened May 14, 1952. the theater is still standing next to it. same building look at the windows.

The linden was listed in the Columbus city directory in 1961:
http://tinyurl.com/mwg4rd

Looks like the Linden had a closing date in the mid-sixties. It’s hard to pin down accurately, as they went “adult” near the end and adult theatres weren’t listed in the daily directories.

This was one of the few neighborhood theatres in Columbus with a balcony.

County records show the land purchased by the Public Library on 5/6/1966.

another rememberence of the Linden Theater: they served Frozen Custard, in addition to the standard fare of hot dogs, pop, candy and popcorn. You could watch a whole afternoons worth of movies (Hopalong, Roy,and Gene) and cartoons, plus fill your belly with all sorts of sugar laden goodies, for LESS THAN $1 !!

According to the TheatreOrgans.com Searchable Opus List Database of original theatre organ installations, the Linden Theatre had a Wurlitzer theatre pipe organ, model 109CC, opus 1876, installed on May 10, 1928. The regular model 109 was a piano-console instrument having two manuals, three ranks, four tuned percussions (including the piano built into the console) and 17 traps and sound effects.

However, the “CC” suffix might indicate “curved console”. If true, that would mean this organ was equipped with a horseshoe console rather than a piano console (the piano, if present, would then be played electro-pneumatically at some distance from the horseshoe console).

It’s too bad to hear this theatre burned down (or, perhaps, was gutted by fire?). If the organ was still there, this would have surely destroyed it. However, perhaps the organ was removed earlier, when talking pictures came in.

Does anybody know the whereabouts today of Wurlitzer Opus 1876, or its parts?

J. Edgar Outcalt was practicing architecture in Columbus at least as early as 1915. In 1926 he was secretary and treasurer of the Columbus chapter of the American Institute of Architects.