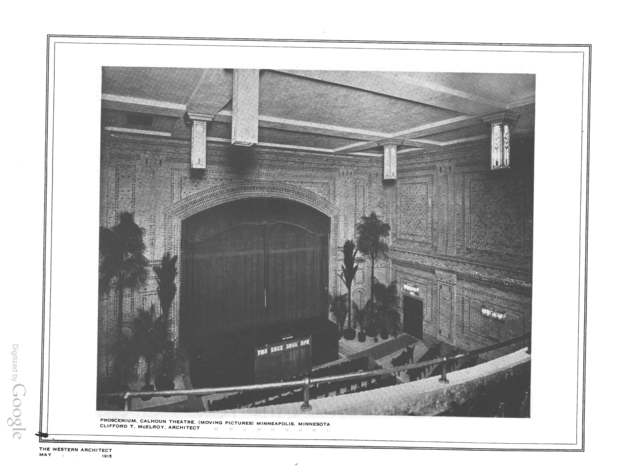 As theatre it opened in 1915 and was enlarged just six months after its opening. It was equipped with a 2 manual Marr & Colton organ in around 1920, but it closed in 1921.

I have lived two miles away for decades and always thought that this structure would make a good theater because the arch from the stage is visible from the rear of the structure, which is a McDonald’s parking lot. It is simply filled in with concrete blocks and painted. It looks like a cheap patch job. They must have demolished the stage house to make room for the parking lot. There are brick window patch jobs on the rear of the wall that must have been dressing rooms or offices at one point. The other three sides of the building had no windows above street level, until about five years ago when the restaurant renovated. It was a small private vocational school for above 40 years before that, and the entire building was painted olive green for the entire period.

The May, 1915, issue of The Western Architect said that the Calhoun Theatre had been designed by architect Clifford T. McElroy.

The May, 1915, issue of The Western Architect also contains floor plans and some excellent photographs of the original interior, its balcony, patterned brick walls, and leaded glass light fixtures. Has anyone been inside this building recently? Do any of these original features still exist?

Dave Kenney’s Twin cities Picture Show says that the Calhoun Theatre was converted into a ballroom by owners Finkelstein & Rubin. They had taken over the house in 1918, and then took over the larger and newer nearby rival, the Lagoon Theatre, shortly after.

Sometime between 1930 and 1935, the building was converted from a ballroom into a showroom for a Nash automobile dealer. The Hennepin County Library has a photo made at the time of the conversion (I don’t know if this link will work, as the library doesn’t provide designated permalinks.)

Text on the photo’s page gives the address as 1400 W. Lake Street, which is certainly the correct current address. The building is still standing, but has had additional windows punched into it, and Clifford McElroy’s beautiful tapestry brick facade has been painted over.

The February 19, 1916, issue of The Moving Picture World said that the Calhoun Theatre had reopened on January 29 after being closed for an expansion. The project had almost doubled the seating capacity of the house to 1,430. The Calhoun had originally opened eight months earlier. Satellite View does show that the current building is considerably deeper than the building shown on the original floor plans which can be seen on our “Photos” page.