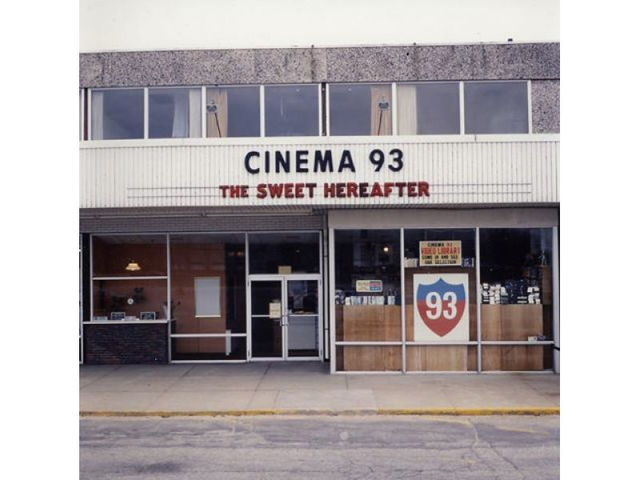 Cinema 93 opened in the summer of 1967. It ran first-run films for many years, competing with the other two first-run theatres in Concord. Barry was an exceptionally knowledgeable film buff and after a four-plex cinema opened in Concord in the late 70’s and it became harder to obtain films, he played some classics from the 30’s and 40’s as well as a great many “art” films. He was extremely successful, running “La Cage Aux Folles” for many weeks. He found patrons in Concord that were very loyal. He also was innovative in selling videos in the theatre lobby to great success. By the late 90’s the strip mall in which his theatre was situated underwent changes and he was pushed out. He moved his video business to downtown Concord occupying half of the former Star Theatre on Pleasant Street. Unfortunately his tireless efforts to relocate the theatre were not successful although there was talk of him taking over the former Concord Theatre at 18 ½ South Main Street. Fortunately he found a place at the Red River Theatres in Concord where his familiar visage and amazing knowledge of films is appreciated and well-utilized.

Actually Cinema 93 opened in April 1967 by a management company that owned a string of theatres thoughout New England, mainly in Boston. My father purchased Cinema 93 in 1974 (or so) and remained in the employ of Melrose Management which was located on Church Street in Bay Village. Barry had many successful years until the 4plex was opened in the heights in roughly 79/80. After which the bid wars on commercial product was virtually impossible to compete with and after a major loss on Eastwood’s “Bronco Billy” (1980) he decided to try repetoire and indie films,, to slow but eventual success. He started the video rental business within a couple years of that with 100 VHS tapes,, and some porn titles that were quickly taken out of circulation. The anchor stores in the plaza, IGA/ Grand Union and Kings both closed in the late 80’s, and the plaza went to disrepair quickly. He struggled for about a decade to keep the doors open through the occasional"sleeper" or off chance success of a relatively popular title. At one point in 1998, DeMoula’s Family , which owned the plaza, had informed Barry that the building was due for demolition and he would not be part of the replacement. In 1999, after 32 years,, he closed the doors. A very large portion of my youth,, and young adulthood was spent in that building,, I miss it dearly. He moved the video store, which was comprised of over 15,000 titles by 1999, to Pleasant Street. That business closed due to the advent of DVD and companies like Netflix,,, the video store became nearly obsolete virtually overnight. During that time he concieved of and founded the Red River Corporation, which eventually led to the Red River Theatres in downtown Concord, at which he remains employed as the Facility M anager. 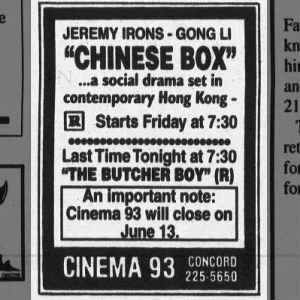