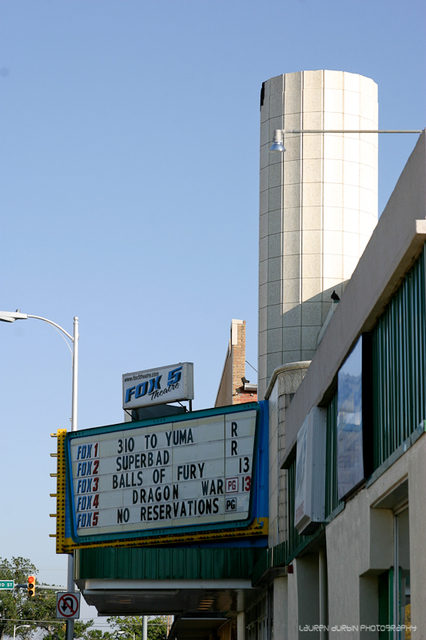 The Fox Theatre opened November 30, 1938 when it was listed with 900 seats. It features an interesting Streamline style and has obviously expanded over the years to occupy adjoining buildings to expand its screen count of 5.

The NRHP Registration Form for the Downtown Sterling Historic District says that the Fox Theatre opened on November 30, 1938. It was converted into a twin in the 1990s, and the conversion to a five-screen operation took place in the 2000s. Both the original theater building and the adjacent building annexed for the project were expanded at the rear at that time.

The American Theatre is either not yet listed at Cinema Treasures, or is an aka for one of the other theaters we have listed at Sterling. If it was an aka, it must have been for the Rialto, as the Princess vanished in the 1920s. A reminiscence of life in Stirling in the mid-1950s by Don Lechman, published in the Daily Breeze on February 14, 2012, mentions the two theaters then operating in the town: “It was 9 cents at the American Theatre and about 12 at the ritzier Fox. Usually, they showed a double feature, a newsreel and a cartoon.”

Thanks, Joe. I removed my note about the American and submitted that as a “new” theater on CT.

And here’s a note that’s definitely about the Fox. Boxoffice, Nov. 20, 1972: “Paul Cory has taken over the operation of the 890-seat Fox Theatre in Sterling. Cory also operates the Starlite Drive-In and the newly erected Center Theatre in the town”