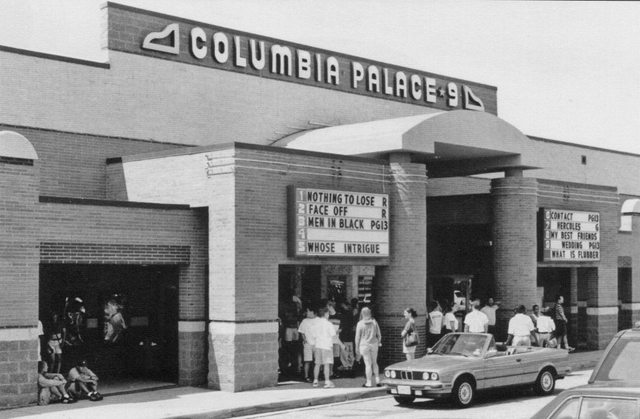 The second movie theater ever built in the city of Columbia, it opened October 3, 1986 by JF Theatres and was designed by the architectural firm of Kelly Clayton & Mojzisek. It was closed in 2001.

The Columbia Palace 9 was across from Howard High School in Columbia. When it opened in 1986 it was a huge success, drawing potential patrons away from Columbia’s first theater, the General Cinema III downtown, which was already struggling. It reigned supreme until the United Artists sixteen-screener opened in Snowden Square across town. Its success basically killed off both of Columbia’s original theaters, with the General Cinema closing in 2000 and Palace 9 in 2001.

A Giant Supermarket sits on the lot where the Palace 9 once stood.

Who owned this theatre? The design looks a little familiar.

thanks holden pike.wonder why it didn’t become a dollar theatre?

The Palace 9 was a Lowes, though I believe it began as an independent, originally, before being bought out. I may have that wrong, but it was definitely a Lowes for the majority of its existence.

Doh! And I misspelled Loews, of course.

This opened on October 3rd, 1986. JF Theatres did not spend any money on a grand opening ad, just its regular listings, which can be found in the photo section for this cinema.

Does anyone by any chance remember a restaurant that was across the parking lot from this theatre in another building? It was dimly lit inside and a popular hangout for people after the movies (at least with people I knew from Columbia in 1989-1990ish). It is driving me crazy trying to remember what it was! I am sure it closed years ago, but I was just thinking of it for some reason recently.

Anyone remember playing the game Ghouls and Ghosts in the video game section? I played it with a friend by the name of Mark Feldman who was a crazy postal worker. His nick name was “the fool” or “the loon”. I don’t think we could quite get to the end as Mark kept screwing it up lolz. Anyway good times were had.