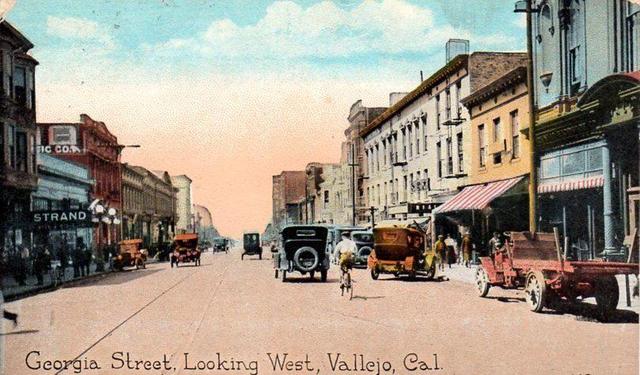 The Strand Theatre was opened in late-1915 or early-1916, and was designed by architect Bernard J. Joseph. It was remodeled in 1935 to the plans of architect Alexander Aimwell Cantin when it was operated by Fox West Coast Theaters (East Bay District). They operated the Strand Theatre in the 1940’s and 1950’s.

Street View is currently set to the wrong side of the street. The site of the Strand was where the single-floor building in between the three story and five story buildings is now. The building might be the shell of the Strand rather than new construction, but I’m not sure.

Seaman’s Handbook for Shore Leave, published in 1920 by the United States Merchant Marine, lists three theaters in Vallejo: the Vallejo, the Rialto, and the Strand. I’ve been unable to determine if the Strand listed was this Strand or an earlier theater of the same name.

A brief article about the Strand Theatre in Vallejo appeared in the January 22, 1916, issue of The Moving Picture World (Google Books scan.) As its seating capacity was 585, almost identical to that of the Fox Strand, I now strongly suspect that it was the same Strand Theatre as this one. The article has a photo, but it is a close view so can’t be compared with the photo we currently display. Still, a bit of detail on the building to the left of the entrance does look very much like the surviving detail on the Victorian structure that still stands on the lot next to the Strand’s site.

The article said that the Strand had opened recently, so it probably opened in late 1915 or very early 1916. Peter J. Hanlon was the promoter of the Strand.

Here is the article that you mentioned (just in case they take it off the internet), published by the “The Moving Picture World”, January 22, 1916 -page 609, titled among the picture theatres. News and Views of Photoplay houses everywhere.

THE STRAND THEATER, VALLEJO, CAL. One of the most up-to-date moving pictures houses in the State of California is the Vallejo Strand theater. As it can be seen from the accompanying illustration it has a pretty entrance, and the name of the house has been worked into the three sides of the drop of the glass canopy, which is studded with incandescent lights and which extends to the edge of the sidewalk. An artistic lamp-post, surmounted with five big frosted globes, stands on each side of the entrance and adds to the brilliancy of the lighting effect of the exterior. The front of the Vallejo Strand is faced with glazed brick.

There are 585 upholstered seats in the theater, which was opened recently. The decoration of the interior is most pleasing to the eye, and the front row of the seats has been placed at a respectable distance from the screen to obtain an undistorted view of the picture. Perfect sight lines, in fact, can be secured from any seat in the auditorium. The air is the house is changed every three minutes by the ventilation system which consists of five ventilators and one three-foot exhaust fan. The operating room is spacious. Tow Power’s 6A, motor driven machines are used and a dissolver. The Vallejo Theatre located on Virginia St. is also equipped with a motor generator. The program is changed from four to five times a week. P.J. Hanlon is the presiding spirit of the Strand theater. (I thought this article was very interesting in that it gives specific details of the theater itself, you can view the photo at the link above from Joe’s post)

The June 9, 1915, issue of Building and Engineering News ran an item that is probably about the Strand Theatre:

“VALLEJO, SOLANO CO., CAL.— Theatre and stores, 2 story and base, reinforced concrete, 35,000. Architect, B. J. Joseph, New Call Bldg.. S. F. Owner, Albert Bernheim. The building will be erected on Georgia street west of Marin, and will cover a large ground area. Besides the theatre the first floor will contain a number of stores. Upper floor will be arranged for offices. Interior of the theatre will be finished in ornamental plaster. Pine trim will be used. There will be steam heat and vacuum cleaning. Special electric work and sheet metal work is called for in the theatre. Patent store fronts are specified. Exterior of the building will be faced with cement plaster. Plans are complete and figures are being taken.”