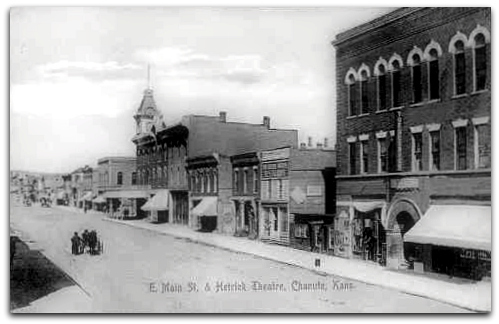 The Hetrick Theatre dated to the late 19th century, and was also known as the Hetrick Opera House. The 1904 Cahn Guide lists it as a 1,050-seat second-floor theater. This photo shows that it was a three-story building in the Romanesque Revival style.

The Emporia Gazette of July 20, 1925, reported that half a block of business buildings at Chanute, Illinois, had been destroyed on July 10 by fire that had started in the Hetrick Theatre. The total loss was estimated at $500,000.

It’s possible that the Hetrick dated from the very early 20th century. The earliest reference to it I can find in Julius Chan’s guides is in the edition of 1904-1905.

A newspaper page from the Norwood News, dated November 7, without a year displayed but from the period 1903-1905, has this item about the Hetrick Opera House:

“Some strange things have happened out in Kansas. Oil has been discovered, and men who a few days ago were poor are now rich.

“One of the most striking cases is that of a man named Frank Hetrick. He owned a farm near the town of Chanute, and bad a hard time keeping the wolf from the door. He can neither read nor write.

His oil royalties now amount to $800 a month He has just completed the finest opera house in Kansas. It occupies half a block in Chanute. He said he Wanted to leave something for a monument.

“Mr. Hetrlck gives a box party at each performance, and Hetrick himself is always behind the scenes, seeing how the actors and actresses do things. They are having the times of their lives, and Chanute has become one of the best theatre towns in the west.”As the Hetrick Opera House is mentioned in the February 13, 1904, issue of The Billboard, it must have opened either in 1903 or in early 1904.