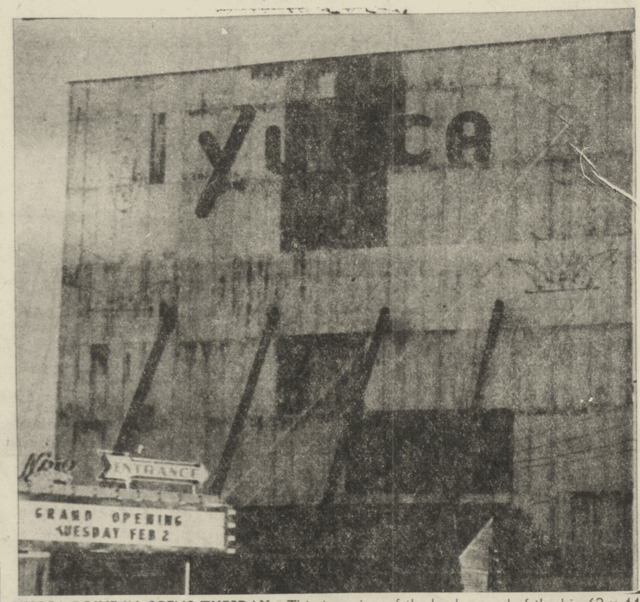 The Yucca Drive-In was opened February 2, 1954, when it was listed a being operated by Frontier Theatres Inc. It was closed in October 1974.

Mr. and Mrs. Marshall Sanguinet launched the predecessor to the Yucca with Alamogordo’s first drive-in, the Starlite Outdoor Theatre on December 9, 1949. The Starlite was located on Highway 70 two miles southwest of the city. In 1952, Sanguinet would begin to build the Yucca north of the city but — apparently — water hook-up was challenging and the theatre would construction, two miles north of the city also on Highway 70 / Highway 54, was halted. During that prolonged process, Sanguinet would sell out to Theatre Enterprises Inc. Circuit which operated the Mesa and White Sands theatres

The ozoner finally launched with a 457-car capacity and its 62x44' screen was the largest in southern New Mexico. Cliff Keim managed both the Yucca and Starlite as well as the White Sands and Mesa though now al in the Frontier Theatres Circuit Inc.’s portfolio. Grace Methodist Church began drive-in services in 1954 at the Yucca.

Yucca Drive-In was north of town. The correct address is:

The incorrect address in the current heading is for the Starlite Drive-In, which was south of town.

However, you can see the remnants of the ramps on the north side. http://tinyurl.com/gnfhn63

Oops…I meant to write no Yucca ads after October 1974.

According to the Alamogordo News, in April 1952, Marshall R. Sanguinet appeared before the Alamogordo City Commission to request water service for “a new drive-in theatre which he has under construction”. The board told him the price difference for a business outside the city limits. On the spur of that moment, Sanguinet requested that the city annex the drive-in site, and the commission agreed.

In December that year, Sanguinet publicly announced his candidacy for a seat on the commission, but he failed to file the paperwork on time. Within a couple of months, he left town to run a construction project in Iceland. His wife looked after his local businesses for a while, then joined him overseas in late 1953. So maybe that was a cause for the Yucca’s delayed opening?

The Sanguinet family must have bounced around. They adopted a daughter while in Turkey, and Marshall died in June 1967 in Pakistan during another construction project.

To amplify DavidAndrews’s note, it appears that the last Yucca Drive-In movie ad in the Alamogordo Daily News was on Oct. 25, 1974. It promised two retitled German-made films “Island of Lost Girls” (Kommissar X - Drei goldene Schlangen) and “How Did A Nice Girl Like You?” (Mir hat es immer Spaß gemacht) running through Sunday, Oct. 27.

There is evidence that the Yucca planned to reopen in 1975. On March 9 that year, it advertised in the Alamogordo Daily News for help at the concession stand. On May 28, it joined about every other business in town in saluting the high school graduating class. (Then again, the Yucca didn’t advertise in that issue although the local “Starlight” drive-in did.)

Workers toppled the Yucca’s sturdy screen tower on Jan. 6, 1981 to make way for construction of a Sierra Ice & Water warehouse.