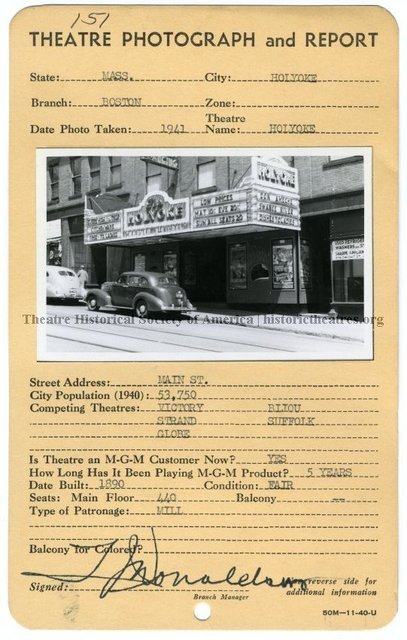 E.M. Loew’s State Theatre began operation in the late 19th century as The Holyoke Opera House. Special trains ran from Springfield and Northampton (MA) to transport opera goers to the performances. The Opera House later became a vaudeville theater under the name "The Holyoke Theatre."

Movies began to be featured along with the live entertainment and by the 1930’s, The Holyoke Theatre was a second-run movie venue. Sometime in the late-1940’s the theater was acquired by the E.M. Loew’s Theatres circuit and renamed "The State".

It continued as a second-run theater until sometime in the mid-1950’s when it closed. The Holyoke Opera House was completely destroyed by a spectacular general alarm fire in the fall of 1967.

The MGM Theatre Photograph and Report project includes the Holyoke Theatre in Holyoke. There is an exterior photo taken in 1941. The brick building containing the entrance appears to sit on a slope running downhill from left to right. There was a flashy rectangular marquee. My Xerox copy is poor, so it’s difficult to read the marquee, but the attraction appears to be “Swanee River”. It also states “Low Prices, Mat. 10 cents, Eve. 20 cents.” The Report states that the theatre is on Main Street. And that the theatre has been a MGM customer for 5 years; it was built in 1890, is in Fair condition, and has 440 seats, all on one floor.

As the Holyoke Opera House, this theatre is listed in the 1897-98 edition of the Julius Cahn Official Theatrical Guide. It’s one of the very few listings in the Guide that has a street address: “Dwight and Front streets”. The Mgr. was W.E. Kendall, the seating was 1,450, admission prices were 25 cents to $1. The theatre was located on the ground floor, had both gas and electric illumination and steam heat. The proscenium opening was 37 feet wide X 30 feet high, and the stage was 52 feet deep. There were 8 members of the house orchestra. Local hotels for show folk were the Windsor, next to the theatre; plus the Hamilton, Guyott and the Marble Hall. Local newspapers were the Transcript, Democrat, Republican, Union, Free Press and Defenseur. The 1897 population of Holyoke was 42,000; there was an area draw for the theatre of 55,000 people.

Too bad there are no photos,but this place was old.

To Revamp Old Holyoke Into a Regular Cinema

HOLYOKE, MASS. — The old Holyoke, for many years he center of lavish stage attractions, is soon to be reopened as a motion picture theatre. Taken over last November by E.M. Loew’s Theatres, the building is to be opened as soon as possible, according to Edward Harrison of Springfield, manager for the Loew organization in western Massachusetts.

A new marquee is to be put up and new display windows added to the front of the building, and as soon as these repairs are completed, an opening date will be scheduled.

Elias M. Loew 1898-1984,once owned 70 theatres,17 drive-ins,and a chain of hotels and motels,one the Gulfstream was a drive-in and motel with the motel built on both sides of the screen it has its own page on C.T.He was not related to Marcus Loew.

As the Holyoke Theatre, this house is listed in the 1927 Film Daily Yearbook as having 1800 seats and open daily.

The Holyoke Opera House was being operated by the Shea Amusement Company from at least 1916 to at least 1920, as noted in the theater inspection reports of the Massachusetts District Police for those years.

The March 18, 1916, issue of The American Contractor said that Boston architects Jackson & Salmonson were preparing plans for $40,000 of alterations to a theater on Dwight Street in Holyoke for the Shea Amusement Company.

I think we have the second architect’s name in the firm field misspelled. Having found a few instances of the spelling Jackson & Solomonson in two sources, and a few instances of the spelling Jackson & Salmonson in two sources, I was uncertain of the correct spelling of the second architect’s surname. However, I have now found several instances of a third variant, Jackson & Salomonson, in five sources, including a modern book and, more importantly, the 1916 edition of The New England Business Directory and Gazetteer. As the canvasser for the directory would most likely have taken the name from the office door, or the firm’s business card, I think we can presume that Jackson & Salomonson is correct.

It might have been 1937 when the Opera House was renamed the Holyoke Theatre. The April 7 issue of Motion Picture News ran this item:

“Boston, April 8. — The Holyoke Theatre, Inc., has been formed to operate the Opera House in Holyoke, Mass. Frederick E. Lieberman, circuit head, is president of the new corporation, while his brother, Morton Lieberman, is secretary. Samuel Richmond is treasurer.”