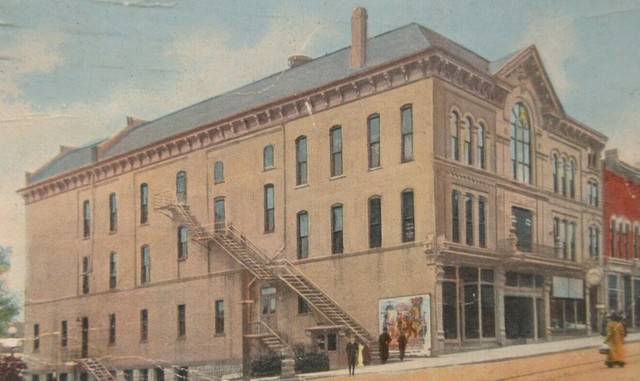 The Opera House was built and opened in 1882. It was damaged by fire in 1903. It was rebuilt to the plans of architect Vernon Redding with seating provided for 1,150. In 1923 it was remodeled and movies were being screened. It became part of the Schine Circuit in the 1930’s. It was closed as a movie theatre in 1940 and then presented occasion events. It was demolished in 1954.

Ashland, by Christine H. Box (Google Books preview) conflicts with our current description of this theater. It says that the Opera House was built in 1882, partly destroyed by fire in 1903, rebuilt and reopened in 1904. It was located at the corner of Main and Center Streets. It became a movie theater in the 1920s, but closed in 1935. The building was demolished in 1955.

There is an early photo of the Ashland Opera House on this page.

The roots of the Ashland Opera House date back to 1882 when the City of Ashland replaced a decade’s old city government building with a multipurpose Opera House Building at 140 Center Street. Fire damage in 1903 gutted the structure but architect Vernon Redding re-imagined the building keeping some of its original structure. The remodeled building housed the library, firefighter’s hall, and selected city government offices including the water department.

The Redding-drawn “New” Ashland Opera House had 1,150 seats with 550 on the floor, 350 in the balcony, and 200 in the gallery. Twenty years later, the city subleased the venue to present movies with the profit split in such a manner that the local mayor’s salary was entirely paid with the house’s proceeds. The theater’s 1923 remodel brought about a small projection booth. Excitement at the venue included a live appearance by Tom Mix and his horse, Tony, on its stage while on another day, Monte Blue appeared on the stage. The venue was known for its occasional “Potato Matinee” in which kids could attend a matinee by bringing a potato or potatoes which were then cooked by the hospital for patients and other needy folks.

Approval of Sunday shows was approved by Ashalnd voters in 1929 which allowed the venue to be converted for sound to remain viable. A permanent fireproof projection booth displaced a portion of the venue’s seating that cut occupancy to 750. The Schine Circuit took control of the venue in the 1930s but the building had two major strikes against it. The first was that the City of Ashland still owned the property and still - apparently - was to receive a share of the proceeds. The second, more important of the two issues - was a 1940 Oho State inspection that suggested that the building should not be used as a regular movie house due to safety concerns.

Schine and the City of Ashland couldn’t agree on the $20,000 needed to bring the building into safety for shows that could have as many as 750 patrons. That ostensibly ended any future that the structure had in housing a for-profit movie theater. The Opera House continued to hold sporadic and smaller live events for a period of time. Meanwhile, Schine would build the new Ashland Theatre to replace the Opera House and appears to have used the Ohio Theatre as a stop gap measure to complete the bookings.

The City of Ashland was challenged when it tried to sell the building for $72,000 to private interests. Once it won its case on appeal to the Ohio Supreme Court, the building was razed. Just prior to that 1954 demolition, the ticket booth, the projection booth, the stage apron and orchestra pit were photographed for posterity. The new owner of the space built a retail location for a W.T. Grant Co., retail store followed by a J.C. Penney Store, and a Home Hardware store. Ashland’s local museum has artifacts from the Opera House including seats, footlights and other ephemera.

(Would prefer the Ashland Opera House as its marketing - ads and program books - generally used that moniker even though the building did not.)