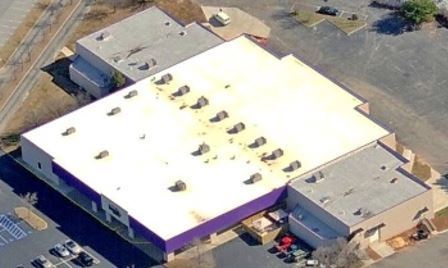 Opened November 27, 1985 as a 6-screen cinema by Litchfield Theatres, along with the nearby Bijou Theatre. The Haywood Road Cinemas expanded to a further 4 screens on June 9, 1989. It had a spacious lobby and an arcade. There was also a video retail outlet.

The last operator was United Artist Theatres. The building still stands in 2012.

I remember this theater very well as I spent many a afternoon there. On the above street view though the building the theater was in is behind that strip mall. You get a better view of it from Airport Road.

This opened on November 27th, 1985 with six screens and expanded to 10 screens on June 9th, 1989. Both grand opening ads in the photo section.

It Was Converted Into An Indexx Store Shortly After Its Closing.

Haywood Cinemas was owned by Litchfield Theatres at the time of its opening in 1985. /Back to the Future/ was among the opening day premieres. 6 screens was big for the time and area. The huge lobby, indoor plants in the queue, and other little touches made it feel luxurious. For instance, every screen had motorized bi-parting horizontal curtains, followed by vertical contour curtains, which was part of the automation for starting every showing. Litchfield was also smart to capitalize on the booming home video rental business. As I recall, their “Reel Store” also sold movie soundtracks and posters.

After United Artists Theatres acquired Litchfield Theatres, it was remodeled in 1989. 4 more screens were added, partly to complete with a new $1 cinema with a large arcade a few blocks away. It remained a popular cinema for several years.

By 1999, the in-lobby store was closed, the fancy curtain motors were disabled, and the theatre was operating with lower attendance and a significantly reduced budget. Competition from other theatres in the area, its location off the main road, and the home theatre revolution were cited as reasons for the decline. Customer inconveniences and temporary closures due to malfunctioning HVAC, projection, and POS equipment were common. Concession was operating with only one working popper and ice machine. In early 2001, the letter marquee facing the road and showing the film schedule was damaged by a storm and could not be replaced with the available budget; it was replaced only with a simple banner showing a phone number to call for showtimes. On more than one occasion, employees pitched in to help out the theatre. An assistant manager contributed his money and time to theme the lobby with sculptures of scenes of current movies in an attempt to bolster attendance. With no budget remaining for a professional technician, I bought parts at local electronics supply stores and made repairs to projection and concession equipment and built test equipment to keep projection running. Competing theatres in the area swapped film prints, projector lamphouse bulbs, and helped each other out with concessions when there were problems keeping up.

The theatre was permanently shuttered in 2001 as part of Regal Entertainment Group’s acquisition of United Artists Theatres. It was one of the last remaining theatres in the area to exclusively use film and analog-only audio for presentation, with most of its equipment still dating back to the early 1980s.

Indexx Inc., a local commercial printing company, purchased the building and began remodeling it in 2005. The facility is still open in 2019.

As someone who grew up in Greenville, I was a customer as a child and an employee as an adult, and have many fond memories of this theatre. As a projectionist and honorary technician, I met my love there in 2000. 19 years later, we are finally engaged to be married. =D