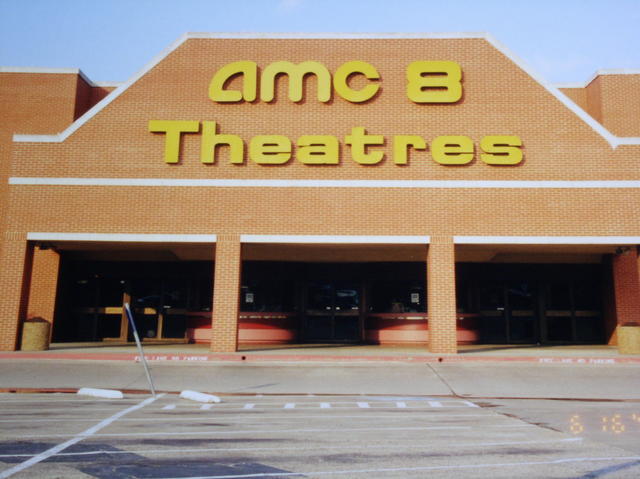 Located in the Towne Crossing Shopping Center, in Mesquite Texas. Opened by AMC November 1, 1985 & closing its' doors in March 1998. It was taken over by Star Cinema and reopened as the Lone Star Cinema in 2002, which closed in 2003. The structure has since been divided into 2 sections.

I miss this theater. Enjoyed quite a few movies here. I remember especially seeing Who Framed Roger Rabbit at this theater when I was 8.

The Towne Crossing Center was a $200 million project to the northwest of the uber-successful Town East Mall in Mesquite. The Town East Mall had launched in 1971 and by the early 1980s had decimated the nearby Big Town Mall to the point that strip shopping centers were being built all around Town East to take advantage of the traffic. People were driving from Rockwall, east Dallas, Garland, Rowlett, Forney and even Terrell to shop and watch movies. General Cinema Corporation (GCC) had launched in Mesquite with its Big Town Cinema in February of 1964. Ten years later it opened at Town East Mall with a twin screener. The other circuits wanted in on the action. The UA Town East 6 was the first competition for GCC launching in June of 1982 and found GCC hastily changing its twin-screen Town East to a five-screen operation.

But AMC’s announcement of an 8-screen theater just across the highway to open in 1985 unnerved GCC. AMC and UA had already undermined GCC in the second-most commercial zone in Dallas by building superior theaters to its GCC Prestonwood Village IV with AMC’s Prestonwood 5 and UA’s Prestonwood Creek 5. Getting less than two years from its five-screen conversion, GCC temporarily closed the Town East V and gutted it to make an improved theater. It also built another six-screen theater to be launched just yards away from its original location. It would not submit to AMC’s announcement.

The AMC Towne Crossing 8 finally opened November 1, 1985. Because clearances were tight, AMC decided to reach an underserved audience. It launched a Bijou screen, a specialty screen showing art films and documentaries. It also opted for midnight shows which proved to be an early hit. Much as in Prestonwood, confusion for consumers was palpable as the four Mesquite theaters were close in both name and proximity.

And eventually General Cinema had weathered the storm as the AMC Towne Crossing would be relegated to sub-run discount status. Gone were midnight screenings and Bijou / Gourmet theater offerings. AMC had other ideas. It would drop the bomb on what had become DFW’s third-most popular commercial theatrical zone with Mesquite only behind the Central Zone and Prestonwood.

AMC delivered the knockout blow to the zone with its 30-screen megaplex, the AMC Mesquite 30, announced in September of 1996 and approved by the Mesquite City Council in December of that year. When it opened in March of 1998 just two exits from the Town East zone, that would end the AMC Towne Crossing. With the Starplex Cinemas adding a 10-screen discount house in Mesquite and a 12-screen theater in Forney and a Cinemark megaplex in Rockwall along with a Terrell multiplex, people weren’t driving to the dated Town East theaters any longer. General Cinema closed its Town East VI as classes went back into session in 1998 and almost as suddenly the Town East V left prior to Christmas of 1998. Within six months, the third busiest zone in DFW went from four theaters to zero.

The AMC Towne Crossing 8 would get one more chance to remain a cinema treasure. Star Cinemas had re-opened the GCC Town East V in December of 2001 but the theater struggled with code enforcement related to restrooms closing at the end of June of 2002. That theatre operation scooted across the highway renaming the AMC Towne Crossing and operating very quietly as the Lone Star Cinema until 2003 and drawing very few customers. Upon closing, the store would be repurposed for retail ventures including a waterbed store. Although the Towne Crossing is largely forgotten, its footprint into the Town East zone and eventual gravitation to the nearby Mesquite 30 changed Mesquite movie-going forever.

This theater usually got the biggest movies back in the 80s and 90s. I grew up in nearby Balch Springs and we had to go a few miles down 635 to Mesquite to see stuff on the big screen. Saw BATMAN here opening weekend in 1989, HONEY I SHRUNK THE KIDS, DICK TRACY, BATMAN RETURNS, PULP FICTION. With that Lone Star Comics store located just a short walk across the parking lot, an adolescent boy’s entertainment needs were well-provided here.