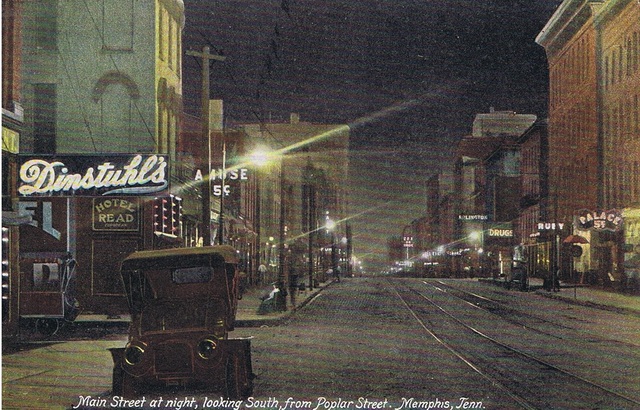 The Palace Theatre at 135 N. Main opened in 1907 and was managed by Jack Amick. It featured Vaudeville shows between films. The Main Street Palace Theatre was listed in the Memphis Directories from 1908 to 1914.

The first Palace Theatre was actually owned and managed by Jack Amick, who was perhaps the first real “showman-manager” of Memphis. The Palace Theatre at 135 N. Main, premiered in 1907. It opened as a moving picture house, but later Jack added vaudeville acts with seven performances daily – 30 minutes each – three in the afternoon and four in the evening. This innovation met with immediate success and the Palace drew crowds each day. Jack had been an actor and after forming the Amick Vaudeville Exchange, he created a circuit of theaters in the South and operated theaters in Meridian, Hattiesburg, Biloxi, Mobile, Pensacola, New Orleans, Baton Rouge and Shreveport. The performers he hired spoke of him as being one of the best managers in the business. In 1908 Jack Amick also became the first manager of The Lyric Theater in Memphis. Jack never completely gave up performing and later moved to Chicago and New York where he continued managing theaters as well as performing. As an actor-manager, Jack Amick was one of the first to take advantage of major advertising – not only for his theaters, but for himself. A true showman! A photo of Jack Amick has been posted.