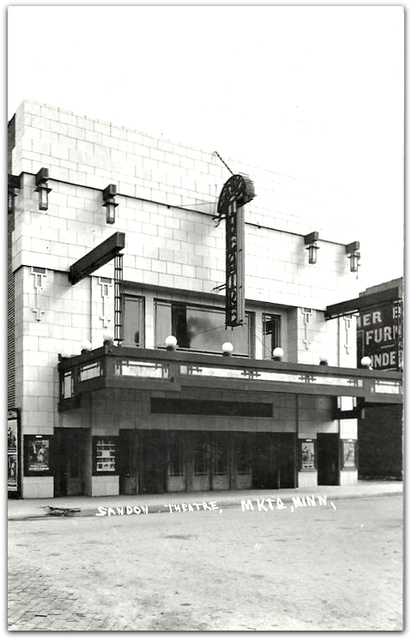 The Sandon Theatre was opened in March 1916, and was designed in a Prairie style. It had a seating capacity for 850 and was operated by the Sandon brothers.

A few genealogy web sites have pages with references to the four Sandon brothers (Harry, Sam, Bill, and Cash) who opened this theater in 1916. One page says that prior to opening the Sandon Theatre they operated a house called the Wonderland Theatre, also in Mankato, which they purchased in 1913. The Sandon brothers had been itinerant musicians, and after going into the exhibition business frequently played in their own theaters. They later operated theaters in Jackson, Blue Earth, and Elmore.

The March 18, 1916, issue of The Moving Picture World had this item about the opening of the Sandon:

“Mankato, Minn.—A modern moving picture theater has been opened by Sandon Brothers on Walnut street. It has seating capacity of 850 and cost $40,000.”

I’d love to know who the architect of the Sandon Theatre was. The Prairie style was rarely used for theaters, though its geometric elements had some influence on the zig-zag phase of the Art Deco style. In fact, two Prairie school architects, the husband and wife team of Walter Burley Griffin and Marion Mahony Griffin, emigrated to Australia in 1914, and a few years later they designed there one of the iconic theaters of the Art Deco period, the Melbourne Capitol Theatre.

What a handsome building. Lighting and marquee and stone and hardware holding the marquee up is beautiful. Sort of Frank Lloyd Wright feeling to it.

There’s a very good chance that whoever designed the Sandon Theatre was one of the young architects who had worked for a time in Wright’s office. Wright and his own mentor, Louis Sullivan, were the chief progenitors of the Prairie style.