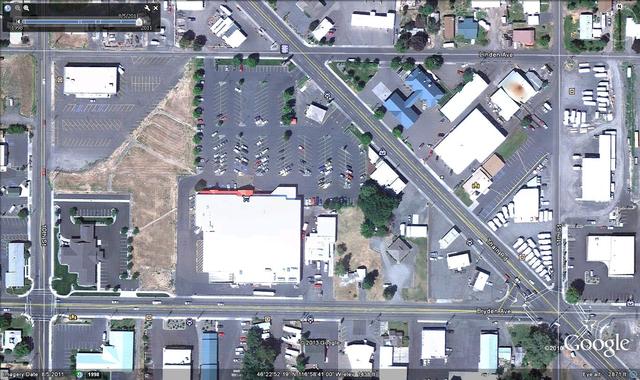 The Orchard’s Auto Theater opened on May 29, 1952 with the Dean Martin and Jerry Lewis comedy “That’s My Boy", a first-run for Lewiston and Mona Freeman in “Dear Brat”. It had a capacity for 400 cars.

There was a previous Orchard’s Drive-In at 605 Bryden Avenue that opened in June of 1950. That first Orchard’s open-air theater was described in the Lewiston Morning Tribune by the owner as just an “experiment.” It had limited parking space and benches for the patrons to sit on to enjoy a summer evening at the movies. The Tribune reported on September 19, 1950 that the projection booth was destroyed by fire the night before while the movie was on. According to later reports in the Spokane Daily Chronicle, the partners in that venture had a falling out and it never reopened.

On January 1, 1954 the newer Orchard’s Auto Theater, closed since November 29, opened with an indoor auditorium seating 300, which included a cry room. The audience could look through a glass wall and see the same movie as the drive-in patrons. The Tribune said it was the only theater of its kind in the Pacific Northwest and that there were estimated to be 25 to 30 like theaters in the East and Midwest. Harry Wall’s Liberty Theater Co. was the operator of the theater designed by William I. Parr, a prominent Lewiston architect. According to Tribune advertisementss, this year-round policy lasted not quite two years before it was abandoned in favor of being open only seasonally.

In 1993 the theater was demolished to prepare for the construction of Rosauers Supermarket, which is there today.

May 29th, 1952 grand opening ad is in the photo section for this drive-in.

More info about that “experiment” in the July 8, 1950 issue of Boxoffice: “Lewiston Orchard’s first theatre has been opened at 607 Bryden Ave. Dean Baird and Walter Campbell are sponsoring the outdoor theatre, which seats 800 people, and has space for 40 cars. A permanent building will be erected later.”

And this must be what led to its closing, from Boxoffice, Oct. 21, 1950: “LEWISTON, IDA. – The Orchards Drive-In, located in Lewiston Orchards, suffered about $2,500 damage in a fire, which destroyed the projection booth. The Orchards, which opened early this summer, was owned by Walter Campbell of Genessee.”

Also opened with a cartoon(not named), and “Dear brat”.