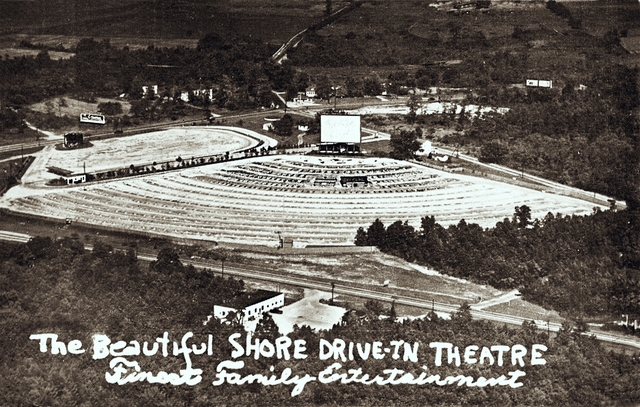 The Shore Drive-In was Monmouth County’s “first” drive-in theatre. The Gala Opening presentation on 12 May 1948 was “Slave Girl” starring Yvonne De Carlo. Several plans to re-open the drive were considered since its closing in the early-1980’s, including the contruction of an indoor multi-screen theatre on the large open area of the drive-in property facing Route 33. The original area name of the Shore Drive-In location was known as Collingwood Park and not to be confused with Collingswood, which is located in Southern New Jersey.

First it was to be a Wal-Mart, then a Home Depot. Now an approximately 130,000-square-foot retail shopping center is proposed for a large vacant tract at Wyckoff Road and Routes 33 and 34, the site of the former Shore Drive-In movie theater. This was October 17, 2004

The proposed Wal-Mart and Home Depot was eventually built a few miles to the East on Route 66 in Neptune, N.J.

The property is still not fully demolished and has been offered, over the years, by several realtor’s. Only a small portion of the southern section of the drive-n location is used as part of the Wawa store and gas stop.

A few miles South on Route 34 is the Fly-In Drive-In site in Belmar.

DEFG…great pictures and ads. I removed my Goggle Earth view since you have upload one.

What is the history of the Fly-In Drive-In?

Hey! I did some research recently and posted a new entry on the Shore Drive-In! https://driveinadventures.wordpress.com/2016/03/29/shore-drive-in-closed-nj/