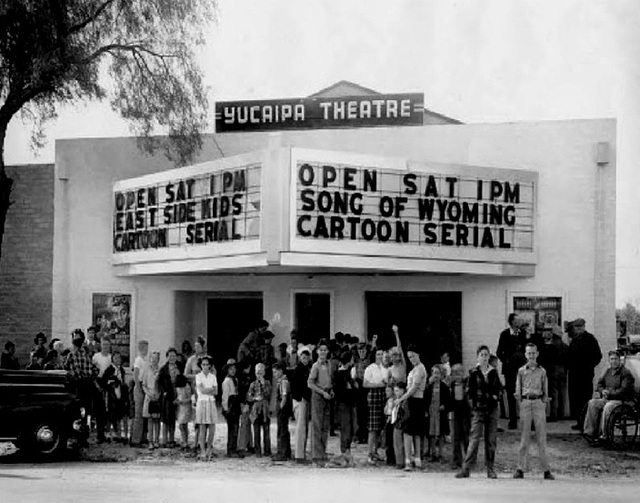 The Vault section of Boxoffice magazine reported that the Yucaipa Theatre was opened on January 30, 1947. Film Daily Yearbook from 1950-51 lists the theatre with 325 seats and the population of Yucaipa as 3,000. Yucaipa, once predominately a farming community, is about 70 miles from Los Angeles.

Over the years the theatre had many operators mentioned in stories from the Redlands Daily facts but none seemed too make it a long-term success. One such owner upon closing put his grievances on the marquee of the padlocked theater that read: “Show biz dead. Pardon padlocks. Gone to funeral".

The problem always boiled down to poor attendance. One mention in the news said the theatre had attendance of 100 on a Friday night but only 10 patrons showed up on Saturday night. This could be because the citizens of Yucaipa preferred to drive 10 miles to the larger Fox Theatre in Redlands. Despite openings and closings it appears that the theater received a lot of use for public meetings and events.

The theatre’s advertising disappeared from the Daily Facts in January of 1965 and it is not known how much of the original theatre still remains. San Bernardino County assessor records, which go back to 1973, show that the building has been used for many businesses since then. A comparison of the front of the building in 2012 to an old photograph shows no indication that a theater was ever there.