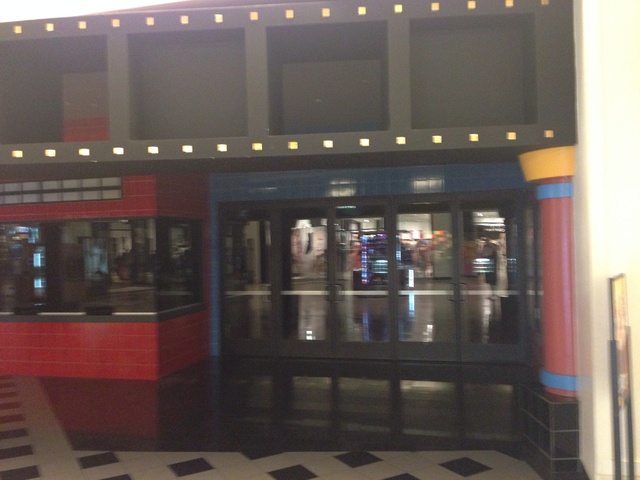 The plans for the United Artists Galaxy Stadium 11 were announced in the Long Beach Press-Telegram in December of 1996. The new theater, to be built in the former Woolworth store at Gridley Road and South Street, the address given was 435 Los Cerritos Center. It was originally to have 2,975 seats, which was 775 more seats than those already at the Mall’s two theaters.

In 1997 United Artists went back to the drawing board when it was decided to change the plans and make it the first UA stadium theater in Southern California. After about a six-month delay the $10 Million dollar complex opened on May 20, 1998 with 2,951 seats. This gave largest auditorium 400 seats and the smallest 184 seats, while most of the remaining auditoriums had around 260-280 seats. The only entrance to the theater and the boxoffice is located inside the mall.

The center had been without movies for a year as the twin theater in the parking lot and the fourplex inside the mall had already been demolished.

After United Artists’ 2000 bankruptcy the theater became part of Regal Entertainment Group but the signage still retained the United Artists name. It was closed in February 2014, and demolished in late-summer 2014.

May 20th, 1998 grand opening ad has been uploaded in the photo section for this cinema. It closed in February 2014.

Macerich, the company which owns the Cerritos property, mentioned the following in their Q4 earnings call:

“At Cerritos, we also announced two additional new anchors. One is the re merchandising of the old Nordstrom store that had been relocated a couple of years ago to a brand new store. That will be a theater, Harkins. And also, we announced that Dick’s will be occupying space there. That’s targeted for fall of 2015 opening.”

So I’m guessing harkins where nordstroms is and dicks where the theater is currently.

Would make more sense as the theater would be closer to the food court.

Status of this should be changed to demolished. Demolition of the theater has started. There are a few nice gaping holes in the wall.

So the building where the theatre was is actually demolished? Or has the space just been gutted?

Scott it’s gonna be a complete demo. It’s in the process of being demolished.

Added a demolition photo from the outside