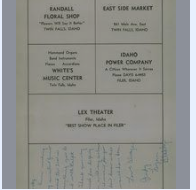 The Twin Falls Times News noted in March of 1941 that Morris Perkins took an old garage in Filer and remodeled it into the Rex Theatre. There was also a previous theater operating in Filer called the Filer Theater but it was closed by the time the Rex Theatre opened.

Perkins sold the Rex Theatre in 1945 and the new owner renamed it the Lex Theatre. It may have still been open at least until October of 1960 when the Times News announced that a post office was being built next to the Lex Theatre. The well-preserved building, with the brick façade and unrecognizable as a theater, can still be seen in downtown Filer today. The Film Daily Yearbook of 1950-51 lists the Lex Theatre with 250 seats.