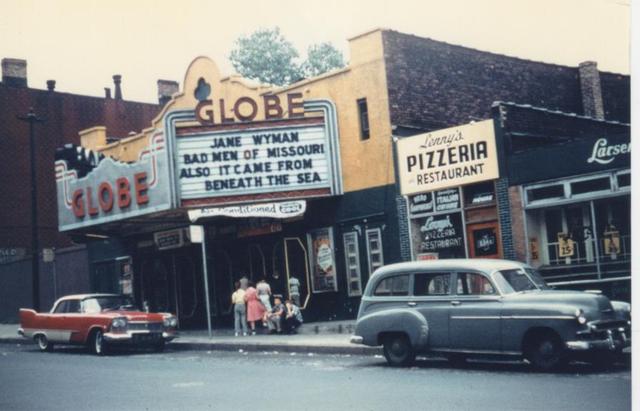 This Park Slope theater was a sub-run neighborhood house. What makes it noteworthy is that the author Pete Hamill mentions it in his autobiography, A Drinking Life, and fictionalizes it in his novel ‘Snow in August’.

The Globe Theatre was opened by 1913. It was run into the ground before it closed in September 1957 with Jane Wyman in “Bad Men of Missouri” & Kenneth Tobey in “It Came From Beneath the Sea”. For a while it served as a warehouse. Then it was gutted and was supposed to become a medical center. This never happened, and seemed to be used as a residence for several years before it was finally demolished in December 2007.

KenRoe: I have a photo of the Globe taken on its last day of business. Don’t have a computer, but would like to mail you a copy if you like, so you can put it in here. Where can I mail it to you ?

frankie, thanks for the offer. E-mail me for details (details on my profile). btw…I am in the UK!

Oh, Ken ! It looks fabulous ! A million thanks ! Hope lots of folk from the old neighborhood get to see it ! This also could have been the ‘60’s; I’m not sure.

Very cool photo fella’s. The red automobile appears to be a 1957 Plymouth.

The former Globe Theatre was demolished in December 2007.

Yes it was. I just passed by and saw the scaffolding. Behind it is a level dirt field. Good-bye Globe —-Hello Condos ???

Classic marquee and cool selection of films. Christine the Plymouth Fury parked in front. Maybe the next film. LOL.

I lived up the block at 238 15th St. I remember the last day of the Globe. It was the Sunday after Labor Day in September 1957. The next day was the start of the school year for parochial and public grade schools in Brooklyn. I remember that It Came from Beneath the Sea was one of the two films shown. I don’t remember the other one. It was the second time that it was shown at the Globe. I saw it there the first time around. I am not sure if the above photo was from the closing day or from the previous showing. I think that Lennys Pizzeria had already closed by September 1957 but am not positive.

The Globe sometimes showed films several years after release. I saw Mighty Joe Young there at least 5 years after it was released in 1949. Sometimes the Globe showed new films at the end of there first run. Films would first be shown in Manhttan and Downtown Brooklyn and make it to the Globe after being shown at the RKO Prospect on 9th St and then at the Sanders on Prospect Park West at 14th St.

My thanks to whoever contributed the above photo. It brings back memories and I appreciate it.