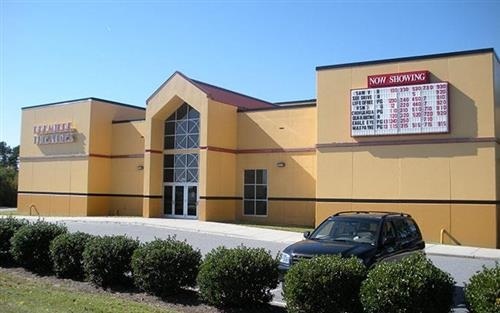 When the Premiere Theatres 7 opened in Kinston on April 21, 2000, it was the first cinema built in town in over thirty years and had the largest screen count of any theater built in Kinston. Designed with stadium seating in all auditoriums and state of the art modern design set it apart from the Plaza Cinema Twin on the other side of town. The Plaza Cinema Twin (the former Trans-Lux In-Flight Cinema, which opened in 1970, but only operating continuously since 1975, was woefully out of date by the time the Premiere 7 opened and closed shortly thereafter.

The Premiere Theatres 7 is currently Kinston’s only operating movie theater. It is located off Hill Farm Road next to the Holiday Inn Express and to the west of the Wal-Mart Kinston Pointe Shopping Center on Highway 70 West.

This is the only theater in Kinston that was built from the ground up as a multiplex. The Plaza and Mall Cinemas were originally single-screen theaters; the Plaza added a second auditorium to the original Trans-Lux theater while the Mall Cinema split its auditorium down the middle.