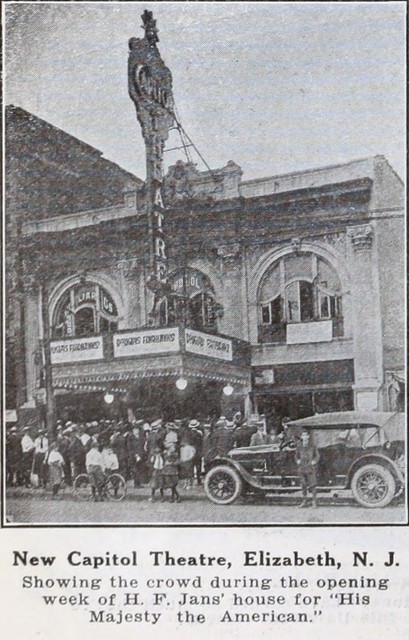 The Capitol Theatre was still operating in 1951.

The Fine Arts Theatre is listed at 51 Broad Street (http://cinematreasures.org/theaters/17154). Were these two theatres (Capitol and Fine Arts) next door to each other or did the number change over time and they were really the same theatre? It seems to be that there is only one building at this address.

The earliest reference to the Capitol Theatre I’ve found in the trade publications comes from a notice in the August 30, 1919, issue of The Music Trades, which said that the largest organ ever built by Wurlitzer had been installed in the house. The latest mentions of the Capitol I’ve found came from 1935.

The building the New Theatre was in looked to date from the 1920s or earlier. It can be seen just beyond the Regent Theatre in this postcard view that dates from around 1960. I think Roger might be right about the Capitol having become the New Theatre, as the next building on the block is at 55 Broad, and in the vintage postcard it doesn’t look especially theater-like, while the New Theatre building does.

I don’t know what to make of the 1951 listing of the Capitol except that, if it comes from the Film Daily Yearbook’s “Circuits” section, there’s a pretty good chance that it’s wrong. The “Circuits” listings are the most unreliable part of the book. I’ve found many houses listed in it long after they had closed or had been renamed.